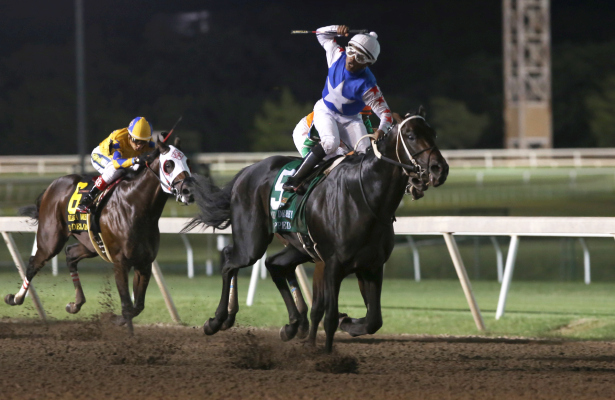 Untrapped is almost always in the hunt but infrequently in the winner’s circle, a status the 4-year-old colt could change in Friday’s 48th running of the $300,000 Pimlico Special (G3) at 1 3/16 miles. Owned by Michael Langford of Arkansas, Untrapped has won two of 15 starts, but his four seconds and four thirds have contributed toward an $812,005 bankroll.

Besides his maiden victory, Untrapped took last fall’s Oklahoma Derby (G3). This year at Oaklawn Park, he had two fourths, a second and a third while competing in all the stakes for older horses going a route. His last start was a third in the Oaklawn Handicap (G2) when he led to the far turn before weakening.

“Untrapped has been a solid horse in very good company,” Hall of Fame trainer Steve Asmussen said at Churchill Downs. “I thought the timing from the last week at Oaklawn to Preakness week really suits him, and he has put in very good works here for the Pimlico Special. He’s cashed some nice checks, but he is capable of the Oklahoma Derby [performance]. When it goes his way or doesn’t go his way, he can take advantage of it. I really like how he’s trained since we’ve been here as well.”

“He’s a talented horse who has kept very good company,” Asmussen said. “He hasn’t ducked anything ever. Heck, he beat Battle of Midway before Battle of Midway won the Breeders’ Cup Dirt Mile [G1] last year. He ran in the Indiana, West Virginia Derby, Ohio Derby.”

Untrapped, indeed, was the poster boy for the geographical Derbys last year, also running the Arkansas Derby and the Zia Park Derby in New Mexico.

“He’s a battler, and the Oaklawn meet was kind of the same thing,” Asmussen said. “He made all the running the Oaklawn Handicap and was third to two very good horses [City of Light and Accelerate].”

Three longshots to fill your pockets on Saturday, June 30