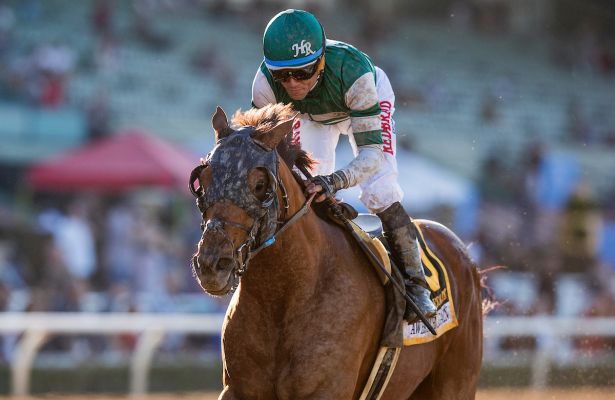 The Awesome Again was built as a showdown between
the seasoned horse and the impressive horse coming off the shelf. Accelerate
entered his final Breeders’ Cup prep off his Grade 1 Pacific Classic romp while
West Coast was making his first start since second in the Group 1 Dubai World
Cup in March.

West Coast also provided Accelerate with some tougher competition before he
ships to Churchill Downs for the Nov. 3 Classic. The win left trainer John
Sadler in a jovial mood.

“It’s a good feeling that
we might go into the Classic the favorite because I like being the favorite,” Sadler
said. “It has the highest probability of winning. He’s a good horse, doing
great and probably the best horse in the country now, clearly. We’ll be ready.”

Made the 1-5 favorite, Accelerate acted up behind the starting gates and
continued to move around once he was loaded under jockey Joel Rosario, who took
over after Victor Espinoza was injured. The 5-year-old horse nearly missed the
break and came away last. West Coast was sharp and away in better order under
Mike Smith.

“I should have taken him
one more time to the gate to stand,” Sadler said afterward. “But, he overcame
it, got a nice clean trip and the best horse prevailed today.”

Shades of Victory initially grabbed the lead, but West Coast was keen to take
over. The opening quarters went in 22.89, 46.17 and 1:10.35. As West Coast
moved, so did Accelerate.

While the original pacesetter couldn’t keep up, Isotherm provided the two
favorites an extra challenge. West Coast was on the rail, Accelerate was wide
and Isotherm turned down the middle of the track. Isotherm was the first to
give in and as hard as West Coast tried, Accelerate was too good, making up all
the ground he lost early and winning by 2 ¼ lengths.

Rosario was focused on getting into a good
position after the slow start, and getting the horse comfortable quick paid
off.

“He was waiting on the turn
and then he took off,” Rosario said of Accelerate. “He’s a really special horse
and I’m thankful John gave me the opportunity to ride him the last two times.”

A win at the Breeders’ Cup would be the first
World Championship victory for Sadler. Bob Baffert, who conditioned West Coast
to third in last year’s Classic, has won the finale three times between Bayern,
American Pharoah and Arrogate.

“Breeders’ Cup is obviously
next up. We’ll train here at home and then go and follow Bob Baffert over there
to Churchill about a week before,” Sadler joked. “We’ll kind of walk behind Bob
and creep up on him.”

The Classic was not definite for West Coast before his return in the Awesome
Again, but the effort seemed to have made an effect on trainer Bob Baffert.

“He’s got a chance to win the Breeders’ Cup Classic with this race under his
belt. He made that horse run today,” Baffert said. “We got beat by a really
good horse . . . (West Coast) was empty earlier than I thought, but his class
kept him in it, he kept running. This race will really set him up well for the
Breeders’ Cup Classic.”

“He really ran a huge race and had an incredible run,”
he said. “I couldn’t ask for more out of him. He really needed that push and we
forced him to move forward a little more but I think that he did well and it
was good for him.”

Horse racing tips TODAY: Horses you MUST back at Newcastle and...

Where are they now? Hardy Eustace