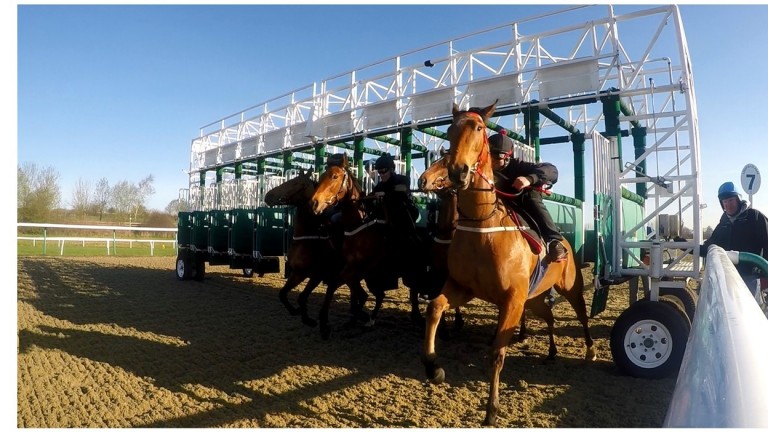 A barrier trial starts at Lingfield

Chelmsford is looking into the feasibility of holding barrier trials, with Newmarket trainers keen to take advantage of the practice races which have proved increasingly popular this year on the all-weather at Lingfield.

Racecourse manager Fraser Garrity revealed: “We’ve been asked about barrier trials by Newmarket trainers and are more than happy to provide that service, especially with Newmarket up the road.

“There would be costs involved – we’d want to cover them and they aren’t inconsiderable.

“Unlike Lingfield we don’t have our own stalls so would have to rent a set and then there’s the cost of medical and veterinary provision and stall handlers.”

Barrier trials are popular in Australia and connections of wondermare Winx regularly use them. They were introduced in Britain in 2015 by horse whisperer Gary Witheford and are gaining more traction, with Lingfield staging another on Wednesday.

The barrier trials at Lingfield, organised and overseen by Witheford and his son Craig, feature not only two-year-olds learning to load into stalls but older horses who have stalls difficulties.

Newmarket trainers occasionally gallop their horses at Chelmsford, with John Gosden notably sending Jack Hobbs for a racecourse spin before his 2017 Sheema Classic win at Meydan.

Chelmsford, meanwhile, is also hoping to woo ITV Racing next year after pitching for coverage having picked up five Saturday afternoon meetings in August and September this year on a three-year lease from the BHA.

Garrity, speaking at the track’s meeting on Saturday, said: “We’ve a £50,000 handicap today and £157,000 in prize-money and on Friday we had more prize-money than Newmarket.

“We have pitched to ITV about Saturday coverage – today they are covering ten races for example, including up the road at Newmarket, and it would be great to be part of the ITV show – but they want to look at how we perform with these races this year.”

Waller pleased with Winx as wondermare returns in barrier trial

editor - July 3, 2018
0
HAMILTON 2.15ZEBZARDEE can get the better of Xtara with the benefit of 6lb less on his back. The tip has shown promise on two starts...

Latest horse racing results: Who won the 1.50 at Newbury live...

Cheltenham is the King of British Racing Festivals – Equnews.com