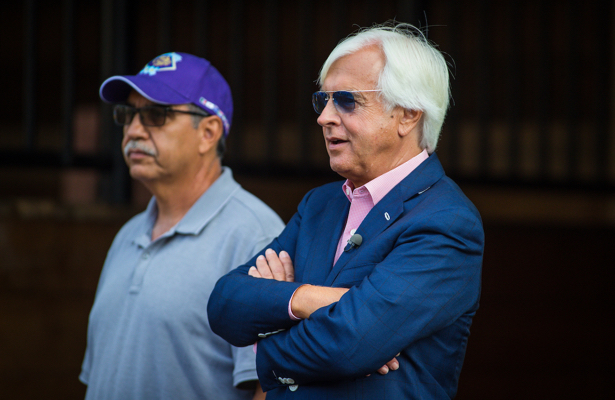 This year’s Breeders’ Cup Classic is widely viewed as an open race, and it’s expected that when pre-entries are announced Wednesday, the $6 million event will be over-subscribed. In a recent interview with Darren Rogers and Kevin Kerstein, who host the “Inside Churchill Downs” radio show, trainer Bob Baffert gave reason to believe the winner will come through his barn.

Each of West Coast, McKinzie and Collected could run Nov. 3 at Churchill.

“Those three horses — they’re gonna make a big statement, I think,” Baffert said. “If they all show up in the gate, I really think one of them can step up and win it all.”

While the contenders are all different ages — McKinzie 3, West Coast 4 and Collected 5 — they’ll enter the Breeders’ Cup with similar race patterns. Each raced early in the year, took off the summer and returned to the races in September with one prep for the Classic.

Baffert said “it’s amazing what one race will do,” likening them to five morning workouts.

Here’s how he assessed his Classic hopefuls:

“McKinzie, after that hard race at Parx, I let him come back to his own because he lost some weight,” Baffert said of the Pennsylvania Derby (G1) winner. “He couldn’t be doing any better.”

“I was really not thinking about running him at all in the Breeders’ Cup,” the Hall of Famer said of Collected, who missed the board in a stakes on the Penn Derby undercard He could also appear in the Breeders’ Cup Dirt Mile. “But then after those last two works, it looked like he jumped back to his old self, working extremely well.”

“West Coast is probably doing the best he’s been in his career,” added Baffert, who in just more than 10 minutes talking about his Classic runners continually touted the reigning 3-year-old champion.

Knowing his horse was a bit short off the layoff, jockey Mike Smith attempted to create some breathing room early, hoping to hold off the competition late. Instead, they caught up quickly.

“So when he got to the quarter pole, I could just tell the horse was empty,” Baffert said. “He had every reason to just lay down and run fifth or whatever. Being the good horse that he is, he dug back in. He tried to win desperately, and he came up to run second.”

Since the Sept. 29 race, Baffert sees a “big difference” in West Coast.

“He really is coming into this race really well,” he said. “You know he’s going to be first or second. That’s just the way he is. I hope he keeps continuing the progress.”

Accelerate closed as a 3-1 favorite in the second and final Breeders’ Cup Classic Future Wager, with West Coast and McKinzie both 6-1 and Collected 40-1. Given the way Baffert’s talking up his charges, credit goes to those who saw the value.

Lady Buttons out to continue her rise in Castleford Chase |...