Battleoverdoyen, a hugely impressive winner of a maiden hurdle at Navan on Sunday for Gordon Elliott, is one of many potential stars being aimed at the Grade 1 Lawlor’s Of Naas Novice Hurdle at the County Kildare venue on January 6.

Speaking at the launch of the race after racing at Naas on Tuesday, Elliott said: “The Lawlor’s Of Naas Novice Hurdle comes at an ideal time of year and all being well that’s where Battleoverdoyen will go next.

“We were delighted to get him started over hurdles at Navan last weekend. I felt he improved from his bumper and hopefully he can improve again from his maiden hurdle to Naas.”

Elliott added: “We’ve entered a good few for the race and we’ll see what happens over Christmas before making any definite plans as to what will run with Battleoverdoyen.

“There’s a good chance Defi Bleu could go there. He ran a nice race at Navan and is still learning all the time. Commander Of Fleet would also be a possible runner. I was happy with his run in the Royal Bond.”

Racecourse manager Tom Ryan said: “We are delighted with both the quantity and quality of the entries for the race.

“At a busy time of year in the National Hunt calendar it has been very encouraging to read comments from a lot of trainers planning on heading for the Lawlor’s Of Naas Novice Hurdle and we are counting down to our biggest fixture of the year.”

The Hong Kong Jockey Club’s stewards have approved an application by William Buick to withdraw his appeal against his six-week penalty and fine of $20,000.

Buick had launched an appeal against the penalty of suspension from riding in races from December 17, 2018 to January 27, 2019 and the fine imposed by the racing stewards on December 9 for reckless riding, to which he had pleaded guilty.

The 30-year-old, who picked up the ban for his sixth placed finish on Pakistan Star in the Hong Kong Vase, was advised that the appeal deposit lodged by him would be returned.

The Unibet-sponsored Champion Hurdle Trial at Haydock on January 19 will be renamed The New One Unibet Hurdle after the top-class hurdler who retired at Cheltenham on Saturday.

The New One, who was unbeaten in five starts around Haydock, won the Grade 2 Champion Hurdle four times from 2015-18 and earned over £1 million in prize-money in an illustrious career for trainer Nigel Twiston-Davies. 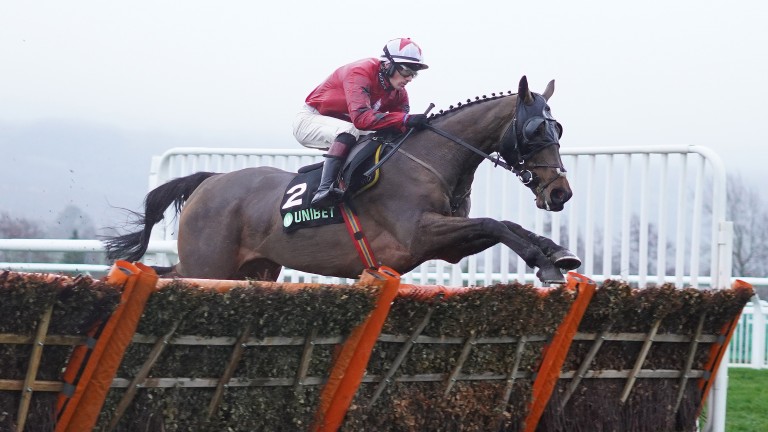 The New One: retired on Saturday

Twiston-Davies, who confirmed the ten-year-old would take part in the parade, said: “The New One was unbeaten five times he ran at Haydock so we love the course and are hoping to find another one to take his place.”

Ed Nicholson, head of Kindred (Unibet & 32Red) racing sponsorship and communications, said: “We are delighted to work with Haydock in renaming the race he won for the last four seasons as the The New One Unibet Hurdle.”

William Hill’s American arm has a new president of digital in the shape of Kenneth Fuchs, the former chief executive of sports data company STATS.

“Our aim is to be the market leader in the US, with a presence in every state that legislates and the best retail and mobile experience on offer.” said William Hill chief executive Philip Bowcock.

“There’s a huge amount to play for, so it’s pleasing we’re building the best possible team to go after it. Ken has deep digital expertise and will be a great asset as we build on the momentum we’ve generated in the US in recent months.”

GVC Holdings, the parent company of Ladbrokes Coral, has agreed a multi-year extension to its supply deal with Denmark’s Danske Spil, one of the largest operators in Europe. GVC – and previously bwin.party, the business acquired by the group in 2016 – has supplied online gaming and poker content to Danske Spil since 2012.

The BHA has announced its publication of a new Safeguarding Policy, Regulations and Code of Conduct for racing, which will come into effect from January 1, 2019.

The policy, which is designed to underpin the existing safeguarding policies already in place, will cover areas such as abuse, inappropriate relationships, reporting safeguarding concerns and safer recruitment practices.

BHA chief executive Nick Rust said: “For this sport to have the bright future we are all working together to achieve, we must attract the interest and participation of people of all ages. It is vital that those people who we do attract to the sport have a positive and fulfilling experience and are protected from all forms of abuse and harm.

“From next year, all trainers will need to act in accordance with the policy and will also be required to complete an online training and assessment module.

The BHA has announced Towcester’s six-race card on January 31 has been moved to Fakenham.

The fate of Towcester, which went into administration in August, will not be known until the new year. Entry and declaration deadlines for the fixture will remain as previously.

Bryan Burrough, who has owned racehorses for the last 40 years including 1983 Grand National winner Corbiere, has joined the board of Newbury racecourse as a non-executive director.

Newbury chairman Dominic Burke said: “We are delighted to welcome Bryan to the board. His many years of experience within business and finance and his deep knowledge of corporate governance will strengthen and complement the existing skill set of the board.”

New Lexington Memorial To Secretariat Could Be A Traffic Stopper –...