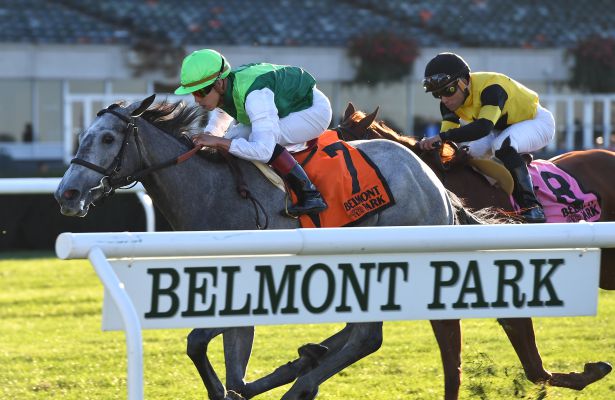 The highly anticipated Belmont Stakes Racing Festival gets underway on Thursday with three stakes events on the docket. Let’s see about building a bankroll into a major weekend capped by Justify’s try at Triple Crown history.

Analysis: #4 Lady Apple (8-1) was clearly second best (11-horse field) in her Keeneland bow for Mark Hubley, and she now goes for Steve Asmussen. She adds Lasix and attracts Irad Ortiz Jr. They paid $525,000 for #7 Tijori (7-5), and she started her career in grand style with a fast wire job win at Santa Anita on May 11. Flavien Prat rides back, Simon Callaghan excels with shippers, and she fired a bullet for this on May 31. #3 Eyeinthesky (7-2) went off as the heavy favorite and swept past the leaders in an easy debut win at Churchill on May 25. #1 Wonder Stone (5-2) earned a quality Pace Rating in her front-running debut at Keeneland April 18. She will take the shortest route under John Velazquez.

Analysis: #7 Delectation (9-2) turned back off a layoff and ran out of ground in a five-furlong graded turf sprint at Churchill May 4. She won four overseas turf races — two at 6 furlongs and two at 8 furlongs — and this extended sprint distance looks just about right. John Velazquez rides back, and Wesley Ward is 6 for his last 12. #10 Stormy Victoria (3-1) could not catch Lady Alexandra last time, but she is 2-for-2 at this trip and might be able to turn the tables. #6 Lady Alexandra (2-1) returned a razor-sharp stalk and pounce winner off a layoff in the License Fee at six furlongs on Belmont turf. She won two local turf sprints last year as well, including one at this distance. She can score again for Jose Ortiz/Graham Motion if she does not regress. #2 La Sardane (20-1) exits a sharp turf route win at Churchill for the productive Flavien Prat/Neil Drysdale team. She was a decent runner in France and drilled a local turf bullet for this May 28. Seven panels too short? #4 Thundering Sky (8-1) faced graded turf milers in her last six (6 0-3-1). She tried this turf distance at Belmont once, and she was a fading 5th in that optional claiming affair last year. The pace should be carved out by #1 Malibu Stacy, #5 Heavenly Score, #9 I’m Betty G, and possibly #8 Faypien.

Analysis: There is not much pace on paper, and #5 Significant Form (8-5) figures in the hunt throughout under Irad Ortiz Jr. The Chad Brown trainee was my Breeders’ Cup Juvenile Fillies Turf selection, and that was the only time she failed to cross the line first (disqualified in career debut last year). Last year, I thought that she would ultimately be better than her highly regarded stablemate Rushing Fall, and it is a great sign that her numbers jumped up several points in her romping 3-year-old bow in the Memories of Silver at Aqueduct April 22. #2 Mighty Scarlett (8-1) followed up a troubled place finish in her Tampa Bay turf route bow with a sharp maiden tally at Keeneland April 27. She will probably stalk slow fractions for the productive Jose Ortiz/Chad Brown team. #9 La Signare (6-1) overcame early trouble and was getting to winner Toinette (won G3 Edgewood May 4) in her U.S. bow at Keeneland April 11 (2 next out winners). She might love today’s added ground. #1 Altea (8-1) is also trained by Chad Brown, but I am concerned about her lack of early speed. #8 Daddy Is a Legend (7-2) fits with these and is frequently in the mix.

Harry Angel to defend Sprint Cup crown as he faces 11...

Loose Women cancelled for the week