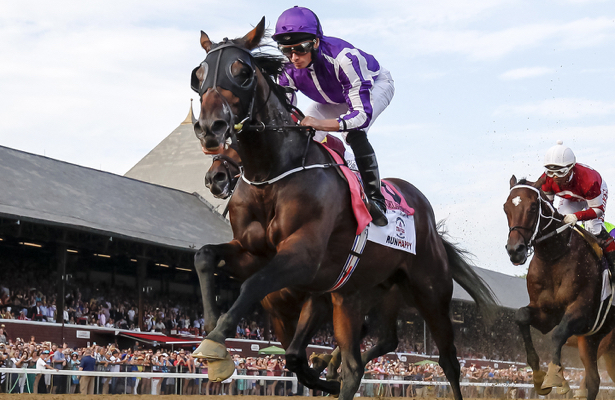 The son of late sire Scat Daddy is standing at Coolmore’s Ashford Stud for an advertised fee of $35,000.

“We’ve had a phenomenal response to him,” said Murray, Coolmore America’s head of sales and marketing. “All the breeders have been out to see him and have absolutely loved him.

“…His pedigree needs no explanation, and being a half to leading sire Into Mischief and multiple champion Beholder, and obviously by our own sire Scat Daddy, he’s done really, really well.”

Get an update on Mendelssohn’s transition from racetrack to Ashford Stud with Robyn Murray of @coolmoreamerica & @ScottTVG.

Mendelssohn, who won the Breeders’ Cup Juvenile Turf at age 2, returned frequently to the U.S. in 2018 for runs at the Kentucky Derby, Jockey Club Gold Cup and Breeders’ Cup Classic, among other races. It was suggested that after the Cigar Mile in December, the Aidan O’Brien trainee could go on to the $9 million Pegasus World Cup. But Mendelssohn ran fourth as the favorite in his career finale.

“He’s been booked full for a little while now,” Murray told TVG, “so we’re delighted at the quality and the amount of mares that he’s got.”

In retirement, the colt, now 4, appeared quite a bit less rambunctious than when seen at the racetrack, too.

Mendelssohn’s auction price soared to $3 million at the 2016 Keeneland September Sale, and Coolmore based him in Ireland. His career highlight aside from the Breeders’ Cup Juvenile Turf was an 18 1/2-length romp in the UAE Derby that secured his trip to Churchill Downs.

“He really is the full package. He’s got the pedigree. Fantastic race record,” Murray added. “He earned two and a half million on the track, and being a son of our own Scat Daddy, too, they’re obviously in hot demand. He’s incredible. Not just to us, but to the whole industry, so that’s something the breeders are really, really interested in.”

Also new this breeding season at Coolmore is Triple Crown winner Justify, another son of Scat Daddy. Justify is standing for $150,000.

Willie Mullins on Ruby Walsh’s return and his own flying start...

editor - November 1, 2018
0
By the end of October last year the perennial champion trainer had saddled 86 winners, which translated to his best ever start to...

Three to watch on the all-weather at Newcastle tonight | Horse...