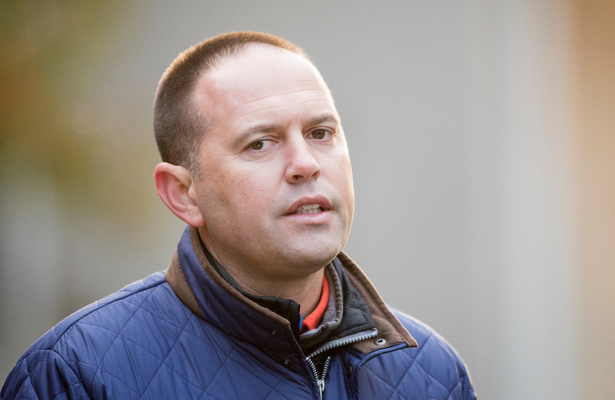 Klaravich Stables’ Complexity is seeking to become the first last-out Champagne Stakes (G1) winner to claim the Breeders’ Cup Juvenile since Shanghai Bobby in 2012. Last year, the Brown-conditioned Good Magic was second in the Champagne before annexing the Juvenile.

“He’s one of the best 2-year-old dirt horses we’ve had, that’s for sure,” Brown said. “He’s an incredible talent. He’s got a lot of natural speed that I believe he can carry a distance of ground. How far, we’ll find out on Friday.”

Also under the Seth Klarman’s Klaravich banner in the Juvenile is Brown-trained late runner Standard Deviation, who exits a third in the Breeders’ Futurity on Oct. 6 and galloped one mile. He won an off-the-turf seven-furlong maiden at Saratoga over wet going to kick off his career on Aug. 19 and has yet to save much ground, going five and seven-wide in his two efforts.

The $450,000 Keeneland September purchase is, like Good Magic, a son of Curlin. Of Brown’s 12 horses, he was the only one to breeze as late as Sunday, drilling a half-mile in 49 1/5 at Keeneland. Such was his second serious drill since the Breeders’ Futurity over the same course and came in blinkers.

“He’s a horse who’s a work in progress, and he’s always acted that way since he was a baby when we first got him early on in the spring,” Brown said. “We thought that long term he was going to be OK. Just time and distance for him.

“He’s had some tough trips, but he’s shown ability in both starts and we’re going to add blinkers with him. It seems to sharpen him up a little bit. Hopefully it gives him a little better position in the race.”

Code of Honor – Thirty years after Shug McGaughey saddled Personal Ensign for her legendary victory in the Breeders’ Cup Distaff, the trainer is back at Churchill Downs with an entrant in the Juvenile. In one of the greatest races of all time, Personal Ensign caught Winning Colors in the final stride to close her career unbeaten in 13 starts and secure a place for herself and McGaughey in the Hall of Fame.

“What is interesting is that it was a long time before I ever watched it again,” McGaughey said. “I am not that big on reruns for some reason. But I did watch it yesterday and it is amazing that she won. I have always said it wasn’t anything I did or what (jockey) Randy Romero did. It was all her.”

Code of Honor arrived at Churchill on Monday and went to the track Wednesday for the second day.

“He jogged a good ways and galloped a mile and a quarter,” McGaughey said.

The son of Noble Mission stumbled badly at the start of the Champagne at Belmont Park but rallied to finish second. In his only other start, he won at Saratoga in August.

“He is coming into the race good,” McGaughey said. “In the Champagne, he had a lot of trouble for a young horse but he came out of it good and since then he is very good. If he gets a clean trip in the Juvenile, we will see what happens.”

A Churchill regular until the mid-1980s when he accepted a position to train for the Phipps family, McGaughey feels at home in his former barn.

“I spent a lot of time at Churchill Downs in Barn 43 before I moved my operation to New York,” he said. “I spent many an hour there so I am pretty comfortable there.”

Game Winner – A perfect 3-for-3 to start his career in California, Game Winner made his first visit to the Churchill Downs oval Wednesday morning for a 1m gallop under Humberto Gomez.

By the time the Candy Ride colt arrived from the West Coast Tuesday morning, he had already been listed as the 8-5 morning-line favorite in the Juvenile, a race Hall of Fame trainer Bob Baffert has won three times. Game Winner and jockey Joel Rosario will start from post nine in the field of 14.

“He’s pretty good out of the gate,” Baffert said. “He has a lot of speed, tactical speed.

“I’m excited about him. He’s been working up a storm. We’ve been working him with an older horse and he’s been handling it pretty well. I’m excited about him. I always get excited about my young ones. We know what the other ones can do already. You’re just hoping for him to take the next step to the next level. There might be something in there that’s getting ready to explode, too. That’s what the Breeders’ Cup is all about. You hope that you’re the guy that’s exploding.”

Horse racing tips: I’m So Fancy can land feature at the...

editor - September 1, 2018
0
I fancy I'm So Fancy can get back to winning ways in the Snow Fairy Fillies Stakes at the Curragh this afternoon. Dropping...

Wincanton, Wolverhampton and Warwick to whet your appetite on Wednesday |...