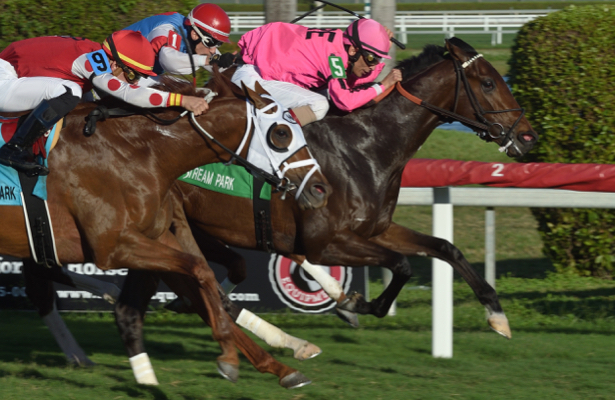 Overlooked at odds of 12-1, Casa Creed ($27.40) completed the distance in 1:30.64 over a firm course under Hall of Fame jockey John Velazquez, who won the Kitten’s Joy for the third time in its seven-year existence and first since 2015 when he also teamed with Saturday’s winning trainer, fellow Hall of Famer Bill Mott.

Casa Creed, a bay son of 2012 Malibu (G1) winner Jimmy Creed, had made all four of his starts at 2 on dirt, breaking his maiden in an off-the-turf sprint going seven furlongs at Saratoga. From there he was a distant seventh in the Champagne (G1) and capped his juvenile campaign similarly far back in the Spendthrift Juvenile Stallion Stakes Oct. 28.

“He left us scratching our heads a little. His last two dirt starts were awfully tough spots,” Mott assistant Ken McCarthy said. “Bill was just looking to change it up one time. He said, ‘Let’s try it and see what happens.’ We were just taking a shot, really.

“This gives him options down the road,” he added, “but it seems to me maybe the turf is where we might now focus. We’ll never rule out anything with this horse.”

Royal Urn, one of three other horses in the field of nine with graded-stakes experience, was intent on the lead and held it through a quarter-mile in 24.58 seconds and a half in 49.03, pressed by Casa Creed while Henley’s Joy rated between horses in fifth.

Velazquez moved Casa Creed up to challenge the leader turning for home but 17-1 long shot Royal Urn was resolute and dug in while Henley’s Joy was steered outside for a clear run down the lane. Casa Creed edged past Royal Urn nearing the wire as Henley’s Joy came flying but fell short.

Winner of the Pulpit Stakes Dec. 8 at Gulfstream, Henley’s Joy was a neck ahead of Royal Urn, with 1 ¼ lengths back to stakes winner Louder Than Bombs in fourth. Moon Colony, Stirling Drive, Bourbon in May, Shazier and Dakota’s Dude completed the order of finish.

“We had a good trip. He broke well and were right near the lead,” Velazquez said. “We let the speed go. I just sat against him on the backstretch and waited, thinking the favorite was going to come from behind so try to wait the best I can. When I let the horse run he ran hard and, sure enough, the favorite was coming. But he put in a good fight and galloped out really well, so maybe this horse will be even better going longer.”

Australia and Camelot at Coolmore