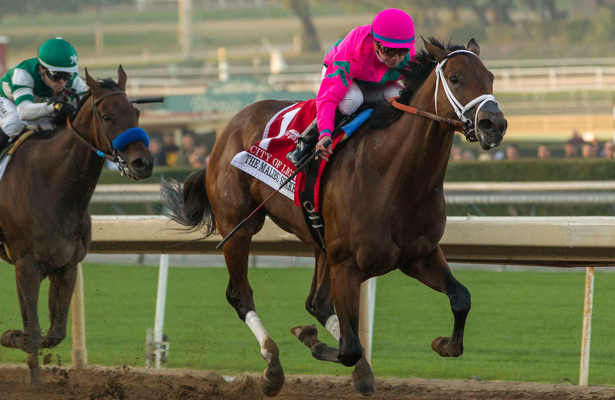 William K. Warren Jr.’s two-time Grade 1 winner City of Light had a get-acquainted session with jockey
Javier Castellano Sunday morning ahead of the Breeders’ Cup Dirt Mile, working a half-mile in :47.60 after the second renovation break.

“This was my first time on him and I liked him,” said Castellano before flying back to New York with a return to Louisville slated for Thursday.

Trainer Michael McCarthy was happy with the breeze over a fast track.

“I was pleased with him and he ran through his gears,” McCarthy said.

Castellano’s work with McCarthy was not done for the morning as a half-hour later he partnered
Ciaglia Racing and Eclipse Thoroughbred Partners’
Paved through a five-furlong turf work with Madaket Stables’ Liam the Charmer in 1:05.60 over a turf course rated as good.

“Those were maintenance works because she is going to go 1 3/8 miles (in the Maker’s Mark Breeders’ Cup Filly & Mare Turf) and he is going a mile and a half,” McCarthy said. “I was very happy
with both of them and they got over the grass fine.”

Maddy & the team look back at the weekend’s action and...