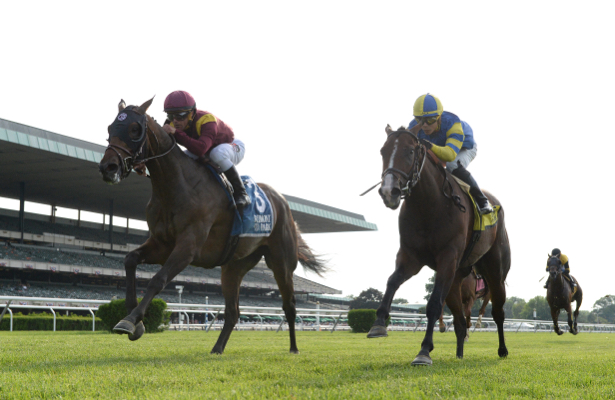 Analyze It is unbeaten no more now that Catholic Boy, in his return to the races Saturday, appeared put away before re-rallying to take Belmont Park’s Grade 3, $200,000 Pennine Ridge Stakes by a neck.

Those two had already distanced well away from the rest of a field of five, which included graded stakes winner Untamed Domain, when their battle began on the turf.

Under jockey Jose Ortiz Jr., Analyze It moved by the pace-setting Catholic Boy at the top of the stretch and appeared gone in the same, dominant fashion that won him Keeneland’s Translyvania (G3) last out.

But after squeezed down on the rail, Catholic Boy settled. Jockey Javier Castellano directed his mount outward, then Catholic Boy continued his rally and passed the 1-5 favorite in the final strides.

“You don’t see too many horses like that when you check at the top of the stretch that come back and win the race, especially at a mile and an eighth,” Castellano said. “I give a lot of credit to the horse and the trainer. I didn’t think he would win.”

“If we were going to beat Analyze It,” added trainer Jonathan Thomas, “I wanted to get control of the pace and make that horse come off the bridle and keep contact with us. If we turned it into a sprint and walked the dog, I was afraid we wouldn’t out-foot him, so I wanted go ahead to send our horse – he’s fit, he gets into a good rhythm – and make [Analyze It] keep contact. It looked like it worked.”

Catholic Boy’s final time for 1 1/8 miles was 1:45.78, and stewards dismissed a rider’s objection lodged by Ortiz.“I guess he got whipped in the face on the turn,” said Analyze It trainer Chad Brown, “but it was before all the stuff happened. He’s steered clear and alone in his races before when he’s been in front. I’ll just have to regroup with the horse and see why he did that today.”

Channel Cat, Untamed Domain and Irish Territory rounded out the order of finish.

The Pennine Ridge marked the son of More Than Ready’s first start since the Florida Derby. Despite administered Lasix, he bled and received time to freshen up. The Thomas trainee had won at this level before on turf in last year’s With Anticipation at Saratoga and contended in the Breeders’ Cup Juvenile Turf.

A bigger test could be ahead with both with the Belmont Derby Invitational (G1) set for next month, also on the lawn.

“I think you have to keep [the Belmont Derby] in consideration, absolutely. It’s a great addition to the racing scene. Essentially, it’s a turf classic, so to speak.

editor - December 4, 2018
0
MS PARFOIS is likely to head to Chepstow for the Welsh National on her next start. She made her comeback on Saturday in the...