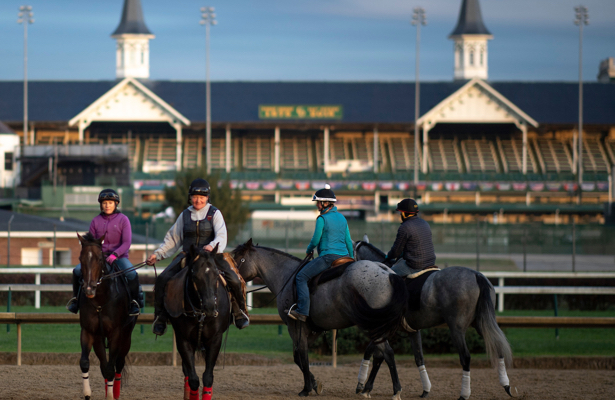 With more than 3,000 pounds of turkey ready to be carved, alongside all of the fixings, Thanksgiving Day at Churchill Downs has been a Louisville, Ky., tradition for nearly a half-century.

“It’s probably our busiest day of the year outside of Derby Week and the Breeders’ Cup,” said Levy Restaurants’ David Danielson, the executive chef at Churchill Downs. “We start preparing the meal months in advance to ensure we have enough food to serve everyone attending. Since we have to order so much food, especially turkeys, we have to start planning our shipments months ahead of time.”

“By Wednesday most of the items are prepped and ready to cook,” Danielson said. “This is one of my favorite times of the year at the track because of how many families come out to enjoy Thanksgiving together.”

The first year that Churchill Downs raced on Thanksgiving Day was 1969. Around 8,000 turkey dinners will be served with all the trimmings, making it the largest number anywhere in the region.

“I’m likely going to send 30 horses to Lexington next spring,” Gargan said. “So, hopefully we’ll be (at Churchill Downs) a lot more next year with horses like this one.”

Six graded stakes races cumulatively worth $1.4 million highlight closing week of the 21-day Fall Meet at Churchill Downs. Below are the probable entrants to Saturday’s Stars of Tomorrow II program which will be drawn Wednesday, per Assistant Racing Secretary and Stakes Coordinator Dan Bork:

Expensive purchase Willie John won’t be rushed up in class by...

editor - August 13, 2018
0
TRAINER Roger Varian will not rush Willie John up in class despite his eyecatching return at Doncaster. The premium 1.9 million purchase is unbeaten...