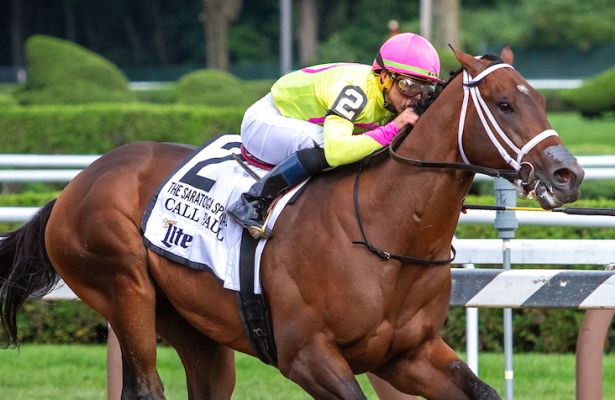 Graded-stakes winners Knicks Go and Call Paul head a group of 27 nominations to the $125,000, seven-furlong Pasco Stakes for 3-year-olds, one of three stakes races on the Jan. 19 Skyway Festival Day card at Tampa Bay Downs.

Both the 20th running of the Pasco and the 35th edition of the $125,000, seven-furlong Gasparilla Stakes for fillies kick off the track’s lucrative stakes program for 3-year-olds, which reaches a crescendo on March 9 with the Grade 2, $400,000 Lambholm South Tampa Bay Derby and the Grade 3, $200,000 Florida Oaks for 3-year-old fillies on the turf.

The Gasparilla closed Saturday with 34 nominations, five coming from the stable of Ben Colebrook.

The third stakes race on the Jan. 19 program is the 35th running of the $50,000, mile-and-a-sixteenth Wayward Lass Stakes for fillies and mares 4-years-old-and-upward. The Wayward Lass drew 18 nominations, including 6-year-old mare Pure Lemon, who won her last five starts last year at Camarero in Puerto Rico by a combined 76 ½ lengths.

Call Paul, owned by Michael Dubb, David Simon, Bethlehem Stables and Bruce Irom, captured the Grade 2 Saratoga Special Presented by Miller Lite as a 2-year-old in August and won the Pennsylvania Nursery on Dec. 1 at Parx Racing in his most recent start.

Another intriguing nominee is the Backstretch Farms-owned, Joan Scott-trained gelding War Bridle, who won the first-ever “Tampa Bay Owners Club” race on Dec. 8 and represents 90 fantasy-based “owners” who correctly selected him to win that contest.

The Pasco Stakes has produced a number of winners who have moved on to greater things, including Musket Man (2009), who went on to win the (then)-Grade 3 Tampa Bay Derby and the Illinois Derby and finish third in the Kentucky Derby and Preakness; Prospective (2012), second in the Grade 3 Sam F. Davis before winning the Grade 3 Tampa Bay Derby and Grade 3 Ohio Derby; and Catalina Red, who set the still-standing track record of 1:21.40 in his Pasco victory and won the Grade 2 Churchill Downs Stakes as a 4-year-old.

Around the oval: Na Pali Spirit rallied from last place on the far turn to win the fifth race on the turf, the Endeavour Prep for older fillies and mares seeking to prove their worth for the Grade 3, $175,000 Lambholm South Endeavour Stakes on Feb. 9.

Camacho added the eighth race, the Cody’s Original Roadhouse Race of the Week, aboard 3-year-old colt So Alive for owner Robert V. LaPenta and trainer Todd Pletcher. Counter Offer was second. So Alive’s time for the mile-and-40-yard distance was a lively 1:41.84.

Thoroughbred racing continues Wednesday with a 10-race card beginning at 12:25 p.m. ET. The track is open every day for simulcast wagering, no-limits action and tournament play in The Silks Poker Room and golf fun and instruction at The Downs Golf Practice Facility

Phoenix Thoroughbreds snap up share in Sands Of Mali

4 longshots to bet on Iroquois Stakes day at Churchill Downs

Godolphin Sets the Standard for Marketing in Horse Racing