Elarqam can fill in a major missing piece in Jim Crowley’s burgeoning career resume on Saturday should he justify growing market optimism in the Qipco 2,000 Guineas.

Seven years on from his sire Frankel’s demolition job on the Rowley Mile, Elarqam carries an unbeaten record and Crowley’s dreams of a first British Classic success.

Championship contenders: get the lowdown on eight jockeys gunning for glory

Crowley was crowned 2016 Stobart Champion Jockey – a title he says he considers himself in the running for once again this year – and enjoyed a landmark season in 2017, securing Group 1 glory with Battaash for his patron Hamdan Al Maktoum, as well as with outside rides aboard Ulysses and Here Comes When.

Crowley made the first four in three of the five Classics last summer and was only denied by half a length aboard Crystal Ocean in the William Hill St Leger, yet that first triumph remained elusive.

Elarqam – whose dam Attraction landed the 1,000 Guineas back in 2004 – rounded off his juvenile season last September with an authoritative win in the Group 3 Tattersalls Stakes.

He is now vying with Masar for second favouritism behind Gustav Klimt in the wake of glowing reports from trainer Mark Johnston and an impressive public workout at Newmarket a fortnight ago.

Crowley said on Thursday: “Everyone wants to win Classics. I was lucky enough to be Champion Jockey and I’ve ridden Group 1 winners and you want to try and win the Classics.

“They’re not easy, there’s only five chances you get and to have a good chance in one, you have to make the most of it.

“I view him the same as everyone else really. He has such a wonderful pedigree and has certainly done everything right so far and I am really looking forward to riding him on Saturday.”

Crowley’s career journey as a professional kicked off with more than 300 wins over jumps before reverting to the Flat racing of his amateur days.

Having finished runner-up in both an Oaks and a St Leger while associated with Ralph Beckett, Crowley’s title charge in 2016 and subsequent recruitment as first rider for Hamdan Al Maktoum have upped his ammunition considerably when it comes to scoring a first Classic success. 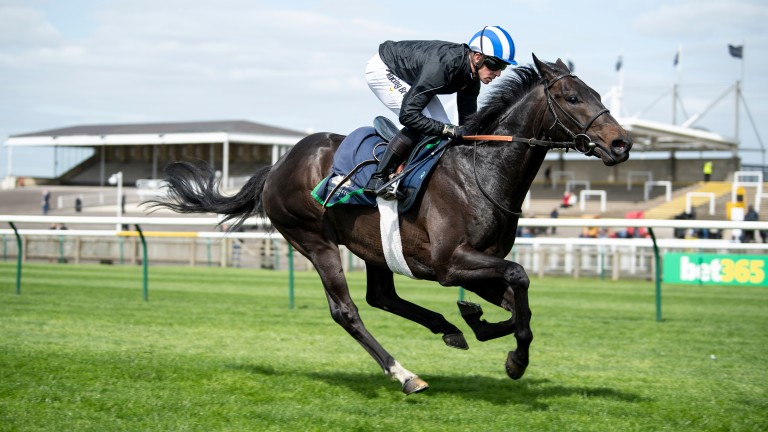 Crowley aboard Elarqam for a racecourse gallop at Newmarket last month

“I’ve hit the crossbar a couple of times and it would be lovely to win one, especially for Sheikh Hamdan,” said Crowley.

Crowley has maintained many of the links that propelled him to the championship two years ago and believes he has realistic hopes of being competitive in this year’s race, which also gets under way on Saturday and for which he is a best-priced 9-1 third favourite behind title-holder Silvestre de Sousa and Andrea Atzeni.

Crowley faced a tricky choice after Ralph Beckett sent out the winners of two trials and was left powerless aboard Lingfield winner Secret Gesture as Prett Polly heroine Talent and Richard Hughes stormed past to lead home a stable one-two. Crowley once again had to settle for the role of bridesmaid when Talent went down by a length and a quarter to Leading Light in the St Leger.

Crowley was only having his second Derby ride when lining up on Eminent, one of the main market fancies after finishing a staying on sixth in the 2,000 Guineas. Despite enjoying a rough passage up the Epsom straight the pair were still in there fighting deep inside the furlong before finishing a luckless fourth

With Ryan Moore always in line to ride one of the Ballydoyle battalion in the Leger, Crowley picked up the ride after impressing Sir Michael Stoute with his handling of Ulysses during the summer. The margin of defeat at the line was only half a length – his closest yet – but Crowley and Crystal Ocean had to give best to Moore aboard Irish Derby hero Capri.

Read all the latest news in the countdown to the Qipco Guineas Festival at racingpost.com/news

editor - September 27, 2018
0
OK, so we won’t get the opportunity to see Instagrand or Roadster during Santa Anita’s autumn meet that begins today and runs through...