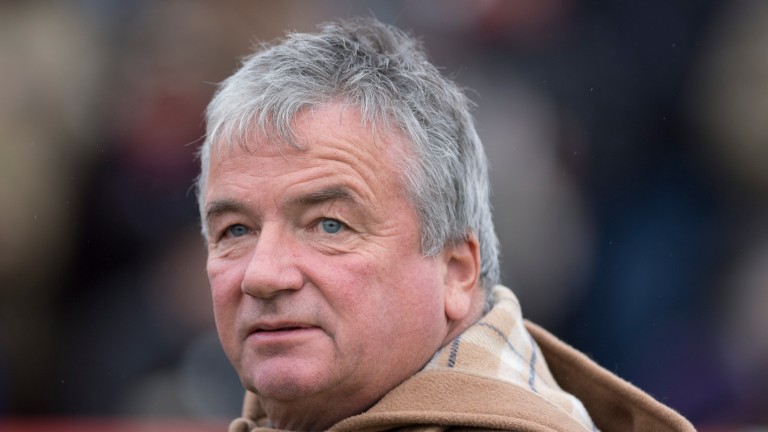 What a splendid fellow Nigel Twiston-Davies is, and what a wonderful trainer. I certainly can’t think of a better man, nor a better trainer. And what a fine jockey Paddy Brennan is, and what wonderful owners Baker Dodd & Cooke are. If there are better owners, I’d be surprised. And Major Malarkey! Of course he rattled a few fences, to make it more of a challenge, but it was a performance reminiscent of Kauto Star at his best, except that Major Malarkey hasn’t won as many King Georges. Yet.

I’d like to be able to report that my investment (I like that word) was the result of a brilliant analysis of the form book and video recordings but it was actually the result of Twiston-Davies saying hello while I was standing doing nothing. Still, it’s important to be in the right place at the right time, a bit like those oldfashioned centre forwards who used to hang around the goal, occasionally sticking a foot out to score from one yard.

Clutching Major Malarkey’s saddle (what a splendid saddle it is), Twiston-Davies told me he thought Major Malarkey’s last run at Bangor had come a bit quickly after his previous winning one at Chepstow and that he was confident of an improved, quite likely winning, run.

So why (you may sometimes have asked yourself a similar question), why, why, why, oh why, did I have only £33 on it? Cowardice, I suppose. If there’s an afterlife, I’m going to stick £222 on it.

Even so, that’s made the day.

Newbury (what a splendid track it is) and everyone here suddenly seem much better. Thank you.

Earlier, in the juvenile hurdle, I backed Wild Geese at over 100-1, which turned out to be an accurate reflection of his performance, but also laid the favourite, Empire Levant, to win £107, after Betfair’s commission. Things were going swimmingly until Encore View was unplaced in the maiden fillies’ race at Lingfield (don’t ask) and ditto Cotillion and According (went out like the proverbial light) in the maiden hurdle at Newbury.

Wayne Hutchinson is one of my favourite jockeys and has an interesting book of rides but when I ask about them, instead of saying “I’m sure I’ll have at least two winners and I might well have four. I’d do a yankee, if I was you,” he says that they have chances of sorts but nothing outstanding. He thinks Tante Sissi might be his best chance of a winner, in the bumper. At least it’s given me someone to blame if things go wrong.

Back to Lingfield (I’m not proud), where Kingscroft’s runner-up spot is worth £104. I quite like short-priced place bets, sometimes. Now it’s time for a tot-up. I don’t mind an interim tot-up when I know I’m ahead. When I’m not, I prefer to leave it until later, in the hope that things will look up. I’m £313 up. Good.

After Major Malarkey’s success, The Independent’s Chris McGrath suggested, “Don’t bet any more”. It was sound advice but I was taken aback because, rather worryingly, it was something that hadn’t crossed my mind. Not bet? What, you mean stop? I think I must have missed the last bit and what Chris actually said was, “Don’t bet any more today after half past three”, and I’m determined not to. Professional, selective, they are my watchwords. What’s running in the next? Why, why, why did I have only £22 on West End Rocker? Because I didn’t know he was going to win, I suppose. He jumped brilliantly, and cleverly, and my advice to trainer Alan King (curiously, he has never asked for my advice, so I’ll just have to give him it uninvited) is to target the Grand National. He’s got Aintree written all over him, although in invisible ink.

While I was writing that, I missed the start of the novice hurdle, in which I wouldn’t have backed Pride In Battle, even though Hutchinson was riding it, so that’s all right. Instead, I’ve gone, with some confidence, for Sonic Anthem and Present Your Case in the conditional jockeys’ race at Bangor. One of them will win, surely? Hang on and I’ll let you know whether one of them does. It just goes to show how wrong you (I’m reluctant to say I) can be. Twice, actually, because my banker of the day was Albertus Pictor in the apprentice race at Lingfield. The snail’s pace heralded doom but I expect Archie Rice would have won anyway.

McGrath was right. I should have stopped. You just can’t help some people. Now I feel a bit deflated. Must reflate myself overnight and come out bold and selective. Fat chance.