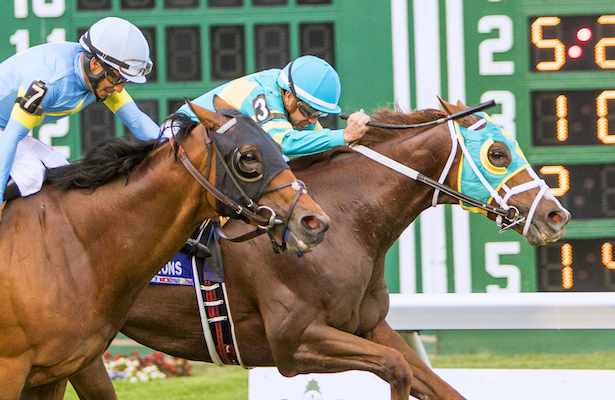 Almost a full year later, trainer Michael Maker still has his doubts when he watches the replay of the 2017 United Nations Stakes that Bigger Picture will find a way to get through on the rail to win the Grade 1 race.

“I still wonder how he got there,” said Maker. “Let’s just say there were a few anxious moments.”

The end result was obviously worth the angst, and Maker is back to try again, sending the same two-horse entry from last year’s United Nations into Saturday’s 65th running of the race, which highlights Monmouth Park’s 13-race card.

Bigger Picture, the 10-1 upset winner of the United Nations a year ago, and stable mate Oscar Nominated, who finished seventh in that race, are part of a nine-horse field entered for the mile and three-eighths grass race that carries a $300,000 purse.

Bigger Picture comes in off a seventh-place finish in the Grade 1 Man O’ War Stakes at Belmont Park on May 12, though he did start the year by winning the Grade 3 John B. Connally Turf Stakes at Sam Houston.

“He’s doing well,” said Maker. “His last race wasn’t up to par but he’s getting older so I don’t know if he is losing some consistency. At the same time, that was a tough field – which you expect in a Grade 1 race.”

That will be the case in the United Nations as well, with trainer Chad Brown sending out four starters in Money Multiplier, Silverwave, Kurilov and Funtastic. It’s a formidable quartet from the sport’s most accomplished grass trainer, but Maker feels Bigger Picture deserves the chance to try to repeat in the race.

“He ran so well at Monmouth last year in this race we felt it was only fair to give him a shot at it again,” sad Maker. “Thankfully, he has been very healthy. He’s a pretty straightforward horse. He generally tries and he obviously has talent.”

Kendrick Carmouche has the mount this year after Joe Bravo produced the upset victory a year ago. Bravo will instead ride Money Multiplier, who has won the Grade 2 Monmouth Stakes the past two years.

Oscar Nominated was a solid second in his last start in the Grade 2 Elkhorn Stakes at Keeneland on April 21, losing by three-quarters of a length to One Go All Go, who is also in the United Nations field.

A 5-year-old son of Kitten’s Joy-Devine Actress, Oscar Nominated is a Grade 3 winner with six wins and eight seconds from 26 career starts. He has banked $1,475,631.

“He’s a very consistent horse,” said Maker, who will be in Canada on Saturday to saddle three horses in the $1 million Queen’s Plate at Woodbine. “Last year in the UN he lost some ground and was a little closer to the pace than we would have liked. But we think he fits here.

“He has been such a good horse for us we’re trying to get him a Grade 1 victory. He is definitely capable of winning one.”

Post time for Saturday’s program is 12:50 p.m. In addition to the United Nations, the card features the Grade 3 Philip H. Iselin Stakes, the Grade 3 Eatontown Stakes and the Lady’s Secret Stakes.

Horse racing tips TODAY: Horses you MUST back at Exeter, Kempton...

editor - December 7, 2018
0
The lightly-raced five-year-old has to cope with a 7lb penalty for his victory but he was good value for the win and he...

No Woodward Stakes for Backyard Heaven, out until 2019