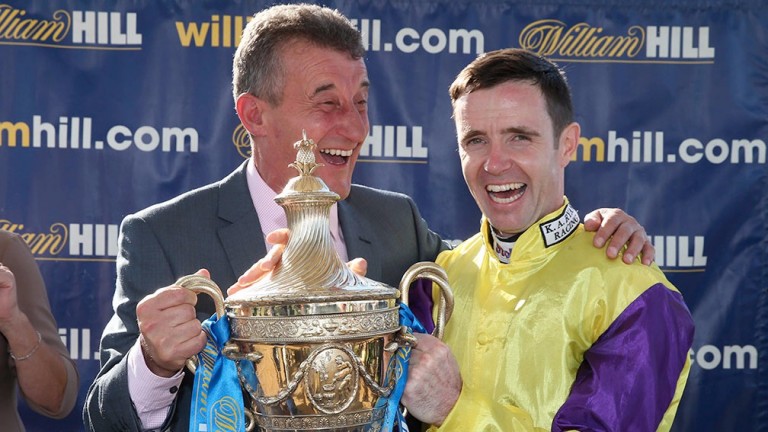 Tom Eaves is itching to get back in the saddle and will return to the weighing room at Musselburgh on Easter Saturday after undergoing hip surgery in the winter.

Eaves was treated for a longstanding injury with some floating bone in his hip causing discomfort, and having undergone surgery in January, is now ready to return.

The jockey said on Wednesday: “All being well I’ll be back at Musselburgh. I started riding out on Saturday. I’ve got a lot more movement in my hip and I’m glad I had it done.

“I’ve been very lucky with Jack Berry House on the doorstep so I’ve been in there two to three times a day and it’s all gone well. I’ll be raring to go come Saturday week.”

Eaves landed the second Group 1 of his career last season when partnering Brando to victory in the Prix Maurice de Gheest for boss Kevin Ryan, and can’t wait to be reunited with the six-year-old.

“He’s the standout one I’m looking forward to getting back on,” he said.

“Kevin also has a really nice bunch of two-year-olds and three-year-olds, and hopefully there are some nice ones.”

GVC cleared to go ahead with Ladbrokes Coral takeover

The Competition and Markets Authority cleared GVC’s acquisition of Ladbrokes Coral on Wednesday, saying the merger did not raise competition concerns.

GVC agreed in December to take over Ladbrokes Coral in a deal valued at up to £4 billion.

“The CMA has found that GVC and Ladbrokes are not close rivals and there are many other providers of betting and gaming services online,” the competition regulator said.

A note from analysts Goodbody read: “This morning’s announcement does not come as a surprise given the diverse natures of the two businesses. Following the approval of the deal by the respective shareholders, the CMA approval is seen as the final hurdle towards deal completion.

“The acquisition will complete on March 28, new shares will commence trading on March 29. We reiterate our positive view on GVC.”

The disciplinary panel of the BHA will hold an inquiry on Thursday to consider whether Stephen Burdett, a registered owner, breached the rules of racing by placing lay bets on Craggaknock, who he owned at the time of the betting activity.

The two races concerned were at Warwick in May last year, with the horse finishing fourth of five, having started at 9-2, and then fifth of six, when 3-1 second favourite.

There will be a memorial service for former jockey Bryn Crossley, who died in January, in Newmarket on April 5. It will be held at 2pm at St Mary’s Church, with drinks at the Wellington pub afterwards. More information can be obtained from Victoria Smith at vickylydiasmith13@gmail.com.

Back To Business For Purton

One trainer, one jockey, one horse and one race to watch...

Stewart: Woody Stephens ‘the next logical spot’ for Givemeaminit