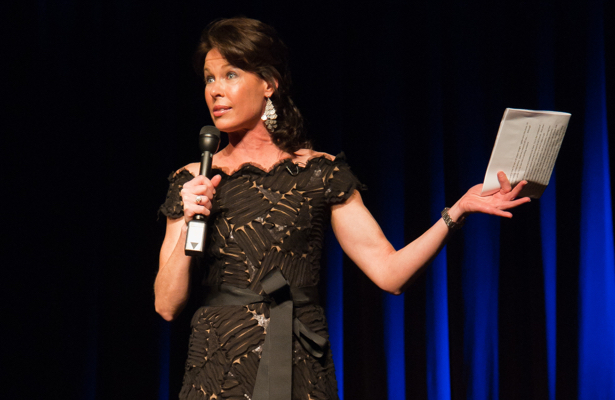 The National Thoroughbred Racing Association, Daily Racing Form and National Turf Writers and Broadcasters announced Wednesday that Jeannine Edwards, who enjoyed an award-winning 22-year career with ESPN and ABC, will host the 48th Annual Eclipse Awards on Thursday, January 24. It will be the seventh time Edwards has emceed the ceremony.

The Eclipse Awards, which honor the 2018 champions of Thoroughbred racing, will be held for the seventh time at Gulfstream Park Racing & Casino in Hallandale Beach, Fla.

“I’m delighted to have been asked to host the Eclipse Awards once again,” Edwards said. “It’s a privilege to be a part of racing’s championship night, and I look forward to the opportunity to connect with old friends and honor all those who made horse racing exceptional in 2018.”

Edwards joined ESPN in 1995 as a Thoroughbred racing analyst and over time became among the network’s most recognizable faces. She worked the sidelines for college football and college basketball, in addition to reporting on a variety of news for SportsCenter, including extensive coverage of American Pharoah’s 2015 Triple Crown run.

A native of Tenafly, N.J., Edwards spent 10 years on the racetrack as an exercise rider, apprentice jockey, and trainer in New York and New Jersey before initially getting into television in 1994 as an in-house TV host at racetracks in Maryland.

Eclipse Awards tickets are available for $425 each or $4,000 for a table of 10. Blocks of rooms have been reserved for Eclipse Awards guests at the JW Marriott (formerly the Turnberry Isle Miami, Autograph Collection). Additional details can be found on the NTRA website at NTRA.com/eclipse-awards.
The “black-tie optional” Eclipse Awards is part of a full week of events that will culminate with the third running of the $9 million Pegasus World Cup Invitational and the inaugural running of the $7 million Pegasus World Cup Turf Invitational on Jan. 26. Separate tickets to the Pegasus World Cup are available on the Gulfstream Park website at pegasusworldcup.com.

Tickets to the Eclipse Awards also include an invitation to a Friday night, Jan. 25, party in the Gulfstream Park walking ring on the eve of the Pegasus.

The Eclipse Awards are named after the great 18th-century racehorse and foundation sire Eclipse, who began racing at age five and was undefeated in 18 starts, including eight walkovers. Eclipse sired the winners of 344 races, including three Epsom Derbys.

editor - November 7, 2018
0
The track at Crane Thoroughbreds is situated next to the road, helping horses learn to focus amid distractions ...