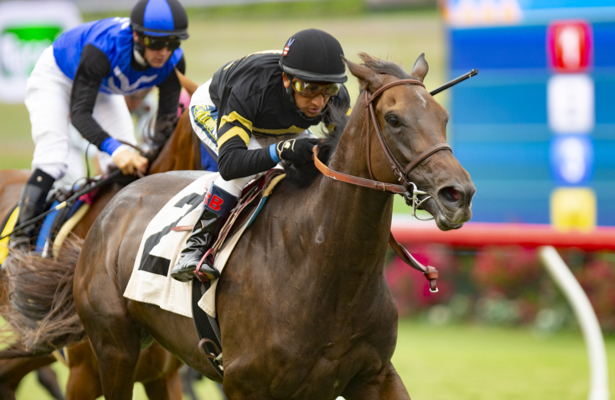 The traditional Thanksgiving Day stakes schedule offers some intriguing money-making opportunities at Aqueduct, Churchill Downs and Del Mar. Let’s try to make the Thanksgiving holiday an even happier occasion with a few more dollars in our pockets.

Command Post is a lightly raced 4-year-old for the productive Irad Ortiz Jr./Jason Servis team. He is fresh, versatile and has run fast enough to win a race like this.

Heartwood likes this distance and drew outside the other speed. He projects an outside stalking trip under Manny Franco.

Celtic Chaos rallied to finish a length and a half behind Runaway Lute last time. The consistent late runner might bet able to grab a piece of this, and maybe more if the pace heats up.

I Remember Mama landed in the trifecta in all seven turf starts (three wins), and the late striding daughter of Ghostzapper has won at Churchill Downs before. She handles firm or soft footing and will try to get involved late under her winning pilot Brian Hernandez Jr.

English Affair was an interesting contender in the Dowager at a mile and a half last time, and she was placed second via disqualification after getting bothered in the stretch. She has run well without winning this year and handles this turf course.

Bonnie Arch is worth considering if you forgive her two turf sprint losses and a pair of failed runs at Kentucky Downs. The two-time local turf winner handles this distance and projects an outside stalking trip.

Coachwhip possesses fine tactical speed and handles any turf footing. She hit the board in her last three turf starts and was a bit more than a length behind I Remember Mama at Keeneland last time.

Divine Miss Grey was simply better than her four rivals in the local Grade 2 Chilukki Stakes at one mile around one turn Nov. 3. She is an obvious pace player in this spot but nine furlongs is a bit beyond her best distance. She might be vulnerable late if the pace is contested.

Skeptic flopped in the Spinster Stakes last time but was unprepared for the start that day. The tactical type won three of four starts before that including the Monmouth Oaks and is interesting at a price.

Dreamcall was in great form earlier this year from March through July. Steve Asmussen’s late runner tailed off in her last pair and has been freshened for this. She is the best finisher in this field and should be heard from late under Robby Albarado.

Mannerly is 0-for-5 in the stakes ranks with a pair of show finishes. She has won at Churchill Downs before, and Thursday’s rider, Julien Leparoux, has booted her home twice. She figures to save ground stalking the pace.

Vexatious seems a bit classier than this group. She won the CTT & TOC Stakes at this course/distance under Rafael Bejarano on Aug. 15 and was placed first via disqualification in the Dowager Stakes at Keeneland Oct. 21. She projects a stalking trip.

India Mantuana has lone speed potential. She opened up a big early lead and smartly went all the way at this course/distance on Aug. 22, but she was facing easier optional claiming foes that day. She looks like the one to reel in under Tyler Baze.

Lucy De is an interesting contender if she is ready to roll in her first start since April for Richard Baltas. She has been competitive in long-distance turf races in the past and her winning rider Kent Desormeaux stays put.

Escape Clause switched to turf and was placed first via disqualification in the restricted Kathryn Crosby Stakes at one mile here Nov. 9. She gets a class and stamina test today, and her biggest asset is her tactical speed. She has a nose for the wire and should get first run on the closers.

Horse Racing Nation handicapper Jarrod Horak provides regular selections for each race at Del Mar. Get them at WinningHorsePicks.com.

editor - January 8, 2019
0
Ben Linfoot looks at the new BHA handicap ratings following the recent action, with three horses added to the My Stable list that...