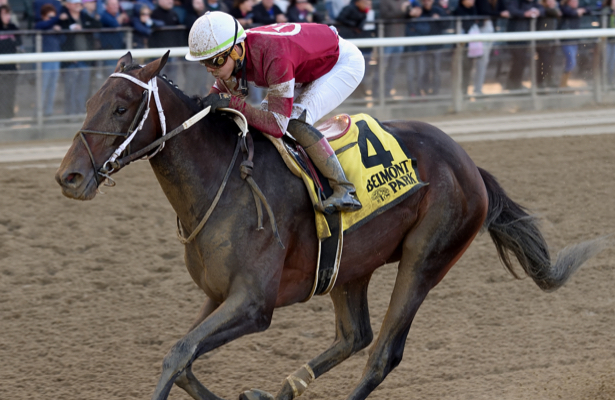 The last opportunity for 2-year-olds to earn points toward the 2019 Kentucky Derby before the calendar turns is set for Sunday, with Remington Park’s $400,000 Springboard Mile having attracted 11 runners.

Steve Asmussen trains five of the entrants, but the one to beat ships in. Epic Dreamer, trained by Kelly Breen, broke his maiden impressively in his prior start at Belmont Park and sits at 8-5 on the morning line with a rail draw.

Post time is 8:52 p.m. ET. See free Springboard Mile past performances, and the Horse Racing Nation team’s picks are below:

Analysis: Epic Dreamer ships in from New York and brings Javier Castellano with him. He shows a good work pattern and has the pedigree to get it done in his two-turn debut. Six Shooter was a sharp allowance winner at the mile distance last out. Worked a bullet four furlongs last week and is ready to roll. Bankit comes off a win in New York-bred company last time out and has run in the superfecta in all four starts. He brings speed and consistency. Tobacco Road will be coming late and has pace to chase. Working good at Remington and has local track experience. I will play a 1-4-8-9 superfecta box.

Analysis: Epic Dreamer looks best from a speed figure standpoint. He steps up into stakes company after contesting a pair of fast maiden races in New York. He finished second in his debut and then stretched out in distance to win comfortably next out. If he gets away smoothly from the rail, he’ll be tough to deny. Dunph displayed talent with his two landslide victories before catching an off track in a ninth-place finish his last start. He will add blinkers, so look for a better effort if the racing strip is dry. Long Range Toddy is on the improve and has two wins over the track, including winning the local prep for this, which may prove to be an advantage.

Analysis: Bankit showed the ability to rate and finish in a big stakes win against New York-breds in the Sleepy Hollow at this distance on Oct. 20. Epic Dreamer was one of three next out winners from a productive Sept. 23 heat, and he stretched out successfully in his maiden win on Oct. 26. Tone Broke is on the upswing for Asmussen, and he exits back-to-back fast track wins at this course/distance. Dunph adds blinkers after chasing a fast pace and fading in the lane in the Kentucky Jockey Club Stakes in the slop at Churchill Downs on Nov. 24. He romped in both fast track starts. The Plays: #8 to win, exacta 6-8-10/1, trifecta 1-8/ALL/6-10

Analysis: From the quintet of Asmussen runners, Tone Broke is my top pick as he looks to come off the pace. The amount of young horses in here who have led every step in their races and won is crazy. I see speed taking on speed and horses losing momentum turning for home. Additionally, D Toz has the home track advantage here and has performed well. Don’t count him out.

Analysis: Epic Dreamer owns the best speed figures and visually looked perfect in his Belmont maiden win. Plus, Castellano does not work with trainer Kelly Breen often, which means Castellano sees something in this colt. He can outclass the field.

Analysis: The Springboard Mile marks Bankit’s first try against open stakes company, but the New York-bred has plenty of stakes experience and showed he could rate with his 5 3/4-length Sleepy Hollow win. Epic Dreamer comes off an impressive maiden win at Belmont after finishing second to next-out Nashua (G3) winner Vekoma. Tobacco Road could be poised to hit the board again after getting back on track at Remington last out, and Six Shooter also looks like he is improving following a third and first against winners at Churchill Downs.

Racing Post - December 26, 2017
0
Anthem Alexander looks on course for the G1 Commonwealth Cup at Royal Ascot after this win at Naas. Could she be another top-class...

Code Warrior All The Way In Seaway Stakes – Horse Racing...