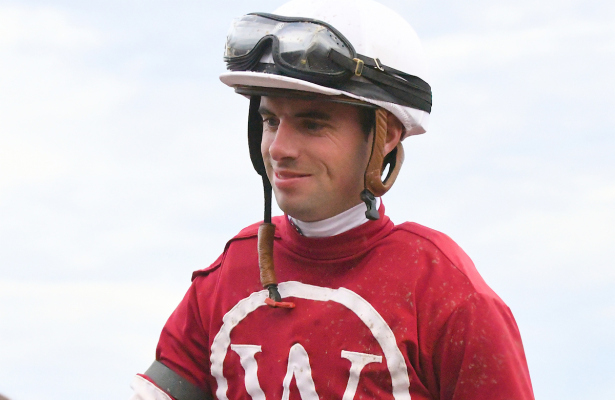 Jockey Florent Geroux took off all of his mounts for Thursday and Friday in order to be with his father, former jockey and trainer Dominique Geroux, in Paris, as he’s in the hospital after a fall.

Geroux’s agent, Doug Bredar, is unsure as to when he would resume riding.

“His father fell on Christmas morning and some friends found him and took him to the hospital,” Bredar said. “It’s a day-to-day kind of thing and it’s really just a matter of what the doctors tell him regarding his father.”

Geroux was named the rider on five horses for Thursday’s card and was scheduled to ride two on the following day.

Stonestreet Stables LLC’s Valadorna emerged from her first stakes victory in Tuesday’s Tiffany Lass Stakes in good order, according to trainer Mark Casse’s assistant, Allen Hardy, and will likely make her next start in the Grade 3, $400,000 Houston Ladies Classic at Sam Houston Race Park on Jan. 28.

“She came out of the race well. She’s happy,” Hardy said. “She was just walking around happy to get out of her stall. She looks good and in well form. She’s happy, she’s healthy and that’s all we can ask for. We’ll see what happens in a few weeks. The (Houston Ladies Classic) is five weeks away and we have a little more time with her to prepare, so just knock on wood everything goes great between now and then.”

A daughter of Curlin, Valadorna has not been off the board in eight career starts which includes a runner-up effort in last year’s Grade 1 Breeders’ Cup Juvenile Fillies behind Champagne Room. She has $498,920 in career earnings.

FARRELL LIKELY TO SCRATCH FROM PAGO HOP; UNCONTESTED COULD STILL RUN IN WOODCHOPPER

Trainer Wayne Catalano reported that Coffepot Stables LLC’s Farrell will scratch from Saturday’s $75,000 Pago Hop Stakes, where she is the 4-1 morning line favorite for the event.

“We’re leaning on not running,” Catalano said. “We all know that her career is on the dirt and we had always talked about running her on the turf but right now might not be the time. We got her in there just in case. We’ve had all this rain so who knows if it will stay on or not?”

Catalano also has Uncontested entered for the $75,000 Woodchopper Stakes on the same day and stated that owner Harry T. Rosenblum will have the final say in whether or not he will run. Should the son of Tiz Wonderful opt for Saturday’s race, it will be his first start on turf.

“He probably will run,” Catalano said. “We have always wanted to try a good fast turf course and I think it’s going to be fast on Saturday, but Mr. Rosenblum will make the final decision. There are some races up in Hot Spring as well if we decide not to run.”

Uni Comes From The Clouds To Nab Matriarch Victory – Horse...

editor - December 3, 2018
0
Sol Kumin of Head of Plains Partners, right, leads Uni and jockey Joel Rosario into the winner's circle after their victory in the...