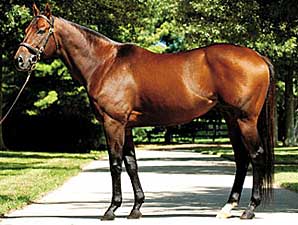 Game Winner has an exciting classic-oriented pedigree. His sire, Candy Ride, was a champion miler in his homeland of Argentina. He captured his first California race by three lengths in a 1 1/16 mile dirt allowance event. Candy Ride returned with a 3/4 length victory in the nine-furlong American Handicap over the old Hollywood Park turf course. In the final race of his career, Candy Ride made short work of Medaglia d’Oro in the 1 1/4-mile Pacific Classic, dominating by 3 3/4 lengths.  He set a new track record in 1:59.11 in 2003, which still stands.

Candy Ride is second only to Tapit in the leading sire ranks. His most accomplished progeny are last year’s Horse of the Year, Gun Runner, and 2013 Champion 2-year-old colt Shared Belief, who later captured the Santa Anita ‘Cap and Pacific Classic at 1 1/4 miles.

Game Winner is the third foal and first blacktype earner out of the unraced Indyan Giving (A.P. Indy – Fleet Indian, by Indian Charlie). She’s a half-sister to the stakes placed sprinter Fleet of Gold (Medaglia d’Oro).

Game Winner’s second dam is 2006 Champion Older Mare Fleet Indian (Indian Charlie). The large mare stood 17 hands high and didn’t start her career until she was three. Allowed to mature, Fleet Indian was nearly unbeatable as a 5-year-old. She racked up a string of seven victories, including the Delaware Handicap, Personal Ensign and Beldame Stakes. She entered the 2006 Breeders’ Cup Distaff as the favorite, but suffered an injury, and was pulled up. She retired with $1,704,513 in earnings in 19 starts.

A.P. Indy is the damsire of over 160 graded and listed stakes winners worldwide. His daughters produced Champion mares Royal Delta and Wait A While, plus Kentucky Derby hero Super Saver and Oaks heroine Plum Pretty.

Game Winner is a long-striding colt. He’s well balanced throughout his body and is obviously athletic, but he paddles with his right foreleg, which can cause stress on the on the limb. Game Winner’s pedigree and conformation indicate that should have no difficulty at nine and 10 furlongs.

Round-up: All Roads lead to Aintree for Ellison