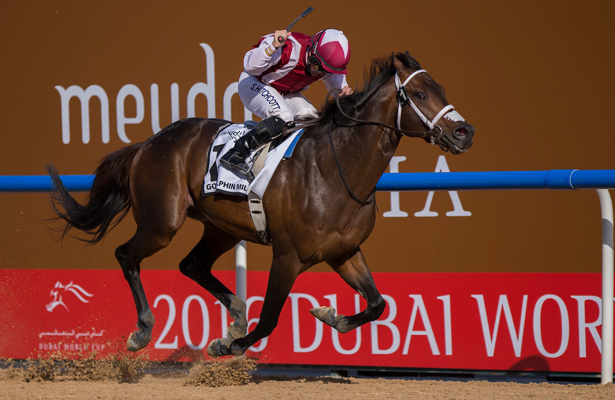 Thursday’s Racing at Meydan card features a fitting preview of the 10-night Dubai World Cup Carnival, which commences for nine consecutive Thursdays starting on Jan. 3 and ultimately ends with Super Saturday, Mar. 9. Seven races are on tap, including a pair of Listed AED 265,000 (about $72,000) stakes, the Dubai Creek Mile and The Entisar.

Much like Paul McCartney’s comeback album, Egypt Station, this past autumn, another One Man Band makes a surprise return with ambitions to debut, like said record, at No. 1 on the charts. The Dubai-based Thoroughbred namesake, who races in the colours of Sheikh Saeed bin Mohammed Al Maktoum, was a record-setter himself when winning the 2016 Godolphin Mile (G2) and enters off a 999-day layoff.

Boasting a record of 8-for-16, all of the son of Pivotal’s victories have been at Meydan, including four Dubai World Cup Carnival tallies and five wins over this trip.

Since then, proceedings have not gone exactly to plan for the gelding who captured the imagination of the global racing scene with a track-record procession one start after coming within two one-hundredths of a second of setting another — a 1400m handicap effort in which he easily defeated 2018 Godolphin Mile winner Heavy Metal. Picking up old friend Sam Hitchcott in the saddle on Thursday, ’Band will be on the run from post four of seven declared, as trainer Doug Watson’s hopeful plans ‘come together’ to help him ‘get back’ to form.

“One Man Band has been off the track for over two years, and he’ll definitely improve from the run. He has been training great,” said Watson, who also saddles two other horses, each making their second starts of the season — Mohd Khalifa Al Basti’s Stunned (Pat Dobbs, post one) and Zaur Sekrekov’s Thegreatcollection (Adrie de Vries, post six).

“Stunned is in fine shape since his 1200m win in November,” he continued. “Thegreatcollection, if he can settle and put his best foot forward, should also be competitive. Hopefully all three have decent chances in the race.”

One Man Band’s chief rival on rating is Nasir Askar’s Secret Ambition, who is unraced since finishing 10th of 13 in Heavy Metal’s Godolphin Mile on Mar. 31. A half-brother to Prix Jean-Luc Lagardere (G1) winner Royal Marine — a possible for the road to the UAE Derby (G2) this Carnival for Godolphin and Saeed bin Suroor — Secret Ambition exits a season in which his upward trajectory topped with a runner-up effort in Kimbear’s Burj Nahaar (G3) on Super Saturday. Richard Mullen rides the Satish Seemar-conditioned son of Exceed and Excel from the outside post.

“He’s in very good form and we believe he’s in as good of shape as last season, when he won three times,” Seemar said. “The only problem is he is drawn widest of all and things can get difficult from there, but he’s healthy, fit and doing really well, so we’ll see how he goes.”

The yard behind Heavy Metal — who rocked this race last year with a one-sided performance — is represented by Sultan Ali’s Capezzano, who breaks from post three under Royston Ffrench for trainer Sandeep Jadhav. The son of Bernardini’s two career wins have been over this surface, including a handicap victory in February over this 1600m trip. Still arguably rather unexposed, the good-looking 4-year-old gelding makes his 11th start.

“Capezzano is a very good horse and has won here over a mile last season before he ran (13th) in the Godolphin Mile,” Jadhav said. “He has been in good form at home, but this is his first race of the season and he will progress. Having said that, he has drawn well, so we are expecting him to run well in a competitive race.”

Over the same 2000m dirt course and distance as the world’s richest horse race, the $12 million Dubai World Cup, The Entisar (Listed) has attracted a quality field of nine, including not just last year’s winner, Etijaah, but also Second Summer and Furia Cruzada, the pair who fought out a thrilling finish to Al Maktoum Challenge R2 (G2) in 2017 on both their local debuts.

Veterinary experts work to stay ahead of equine doping

View From The Eighth Pole: Whipping Up A Frenzy – Horse...