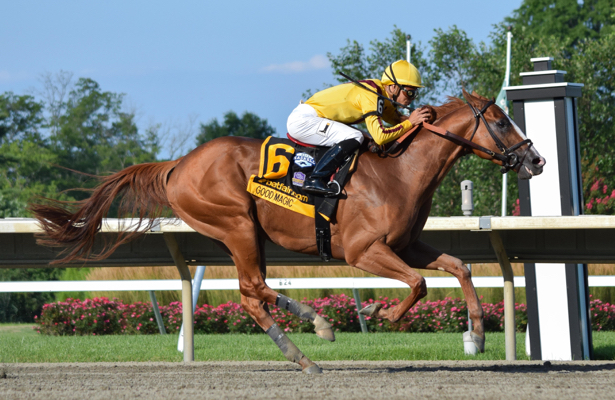 With Justify recently retired, the 3-year-old division lead was open for the taking before Sunday’s Grade 1, $1 million Haskell Invitational.

Afterward? Not so much.

Good Magic put in the type of performance that served as a reminder: Before the precocious Triple Crown winner came along, he was already considered best in this class.

Last year’s juvenile champion stalked the early lead, made a powerful move entering the turn and cruised to a victory under jockey Jose Ortiz, easily topping a field of seven in a “Win and You’re In” race toward the Breeders’ Cup Classic.

“The horse was training great, Jose gave him an excellent trip, and everything worked out perfect,” said trainer Chad Brown.


Good Magic is back! He wins the Grade 1 @Betfair Haskell Invitational and books his spot in the @BreedersCup Classic! #WinandYoureIN pic.twitter.com/htBFaY5c8a

Behind Good Magic, Bravazo ran second, Lone Sailor third and Core Beliefs fourth. None were able to close significantly on a fresh horse coming back from a fourth-place effort in the Preakness Stakes and, before that, a runner-up to Justify in the Kentucky Derby.

“You definitely feel pressure,” Brown said, “but when you have a good horse like him, he’s easy to train. He makes my job easy.”

Good Magic had a clear trip throughout. Ortiz rushed him up to second, then sat contently behind longshot Roaming Union. The pace setter went in 23.16 and 46.83 for the opening fractions but folded entering the turn.

A son of Curlin campaigned by e Five Thoroughbreds and Stonestreet Stables, Good Magic took firm control with a quarter mile to go, winning by open lengths at odds of 1/2.

Up the back stretch, Bob Edwards of e Five noticed Ortiz take a peek back at the competition.

Next, his connections say, is the summer’s premier race for 3-year-olds, Saratoga’s Grade 1 Travers Stakes on Aug. 25. Good Magic is the likely favorite in a field that could feature, among others, Belmont Stakes runner-up Gronkowski, filly Wonder Gadot and the Grade 1 turf winner Catholic Boy.

Horse racing tips January 21: The horses to back at Sedgefield,...

Venetia Williams out to continue impressive strike-rate with Calipto | Horse...