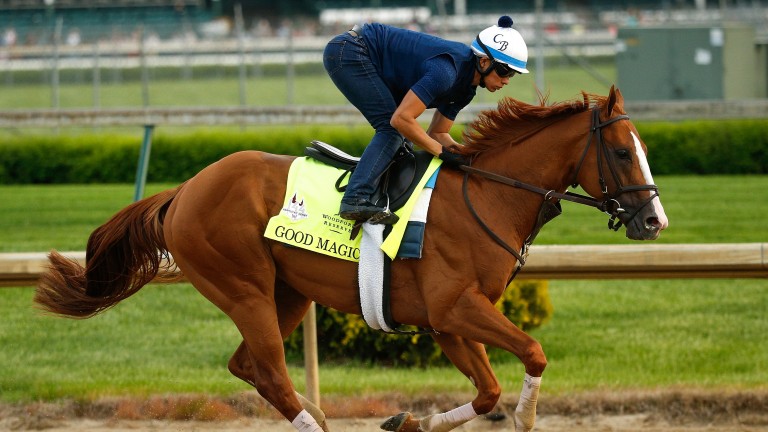 Good Magic: strolled to victory in the Haskell Invitational

With Triple Crown winner Justify retired and bound for a life at stud, it was Good Magic who once again vaulted to the top of three-year-old crop in the eyes of trainer Chad Brown, with several other million-dollar races on the horizon awaiting the son of Curlin after a decisive victory in the Grade 1 betfair.com Haskell Invitational.

“With Justify out this horse is on top of the division. I think everyone would agree with that,” Brown said. “He’s still standing. He’s a tough horse, and I’m so proud of him. This horse trains on. He’s a great racehorse and someday he’ll make a great stallion.”

Owned by Barbara Banke’s Stonestreet Stables and Bob Edwards’ e Five Racing Thoroughbreds, Good Magic’s three-length victory over Preakness runner-up Bravazo in the 51st Haskell left little doubt that he has weathered a runner-up finish in the Kentucky Derby behind Justify and a fourth-place finish in the Preakness after battling with the Triple Crown winner in the early stages.

Considering how comfortably he won the Haskell under jockey Jose Ortiz, the Breeders’ Cup Juvenile winner might even be better than ever.

“The horse needed the time off (after the Preakness),” said Brown, who trained Good Magic up to the Haskell after the homebred’s one-length loss in the second leg of the Triple Crown in May. “I’m surprised that he ran hard on those tracks (in the Derby and Preakness) and still ran like this today. He’s like his father. He’s made of steel.

“I feel this horse is ready for another good form cycle. He ran a great race today and I think he might have had a little more in the tank when he crossed the wire. This horse looks for competition and he couldn’t find any.”

That extra bit of speed and stamina will definitely come in handy next time, as the $1.25 million 1m2f Grade 1 Travers Stakes at Saratoga looms as the next start for Good Magic.

Brown warned that if the Kentucky-bred comes out of the Haskell needing more time, the $1 million Grade 1 Pennsylvania Derby on September 22 at Parx Racing would be in the mix. But there’s now another race in Brown’s long-range plan as the Haskell was a “Win and You’re In” qualifier for the Breeders’ Cup Classic, giving Good Magic an all-expenses paid spot in the $6 million race at Churchill Downs on November 3.

“Having run a great race at Churchill Downs at a mile and a quarter (in the Derby), you would have to think that’s a target for him,” said Brown, who along with Ortiz had four winners on the 14-race Monmouth card. “I’m very comfortable with his race over that track. Hopefully he stays healthy and everything goes right, and we’ll run him.”

Banke picked up her second win in the Haskell, as Good Magic joined 2009 winner Rachael Alexandra, and felt a great sense of pride over breeding him.

“Curlin brings out the best in his offspring,” she said. “The heart, the sturdiness, a quick turn of foot. Having the mare and sire, we’re very proud of him, and you couldn’t ask for nicer and luckier partner.”

While Stonestreet bred Good Magic out of the Hard Spun mare Glinda The Good, a decision was made to sell him at the 2016 Keeneland September Yearling Sale. When doubts set in, they reached out to Edwards and partnered with him to buy Good Magic at the auction for $1 million.

In the process Banke brought into the fold an owner in the midst of an auspicious start in racing, with three Breeders’ Cup winners and an Eclipse Award winner since entering the game in 2016.

“Barbara bred the horse and raised him,” Edwards said. “Chad did a tremendous job training the horse. I bring the luck and show up at press conferences and say some things that might be off-color. I surround myself with smarter people than me, and you couldn’t have a better partner than Barbara. This is a special day for me and even more special (for) Barbara, because she raced Curlin and won this race with Rachel Alexandra.

“Everything was great. I hadn’t seen the horse in a while, and he gained weight since the Preakness. When I saw him today, I said, ‘Wow.’  He looked great. He was more muscular.”

Good Magic ran to his looks, as he chased the pace of the longshot Roaming Union through a half-mile in :46.83. He surged to the front at the quarter pole and quickly kicked clear to a four-length lead at the eighth pole, as Bravazo moved into second but was no threat to the winner.

It also gave Brown a sentimental win at a track with special meaning for him.

“I took my trainer’s test here after the 2007 Breeders’ Cup,” he said. “This is one of the tracks I got started at and a race near the top of the list of the ones I wanted to win. We ran two horses here last year – one of them the favourite (Timeline) – and came away empty, so to win today is special.”

Bravazo, one of three horses in the field of seven at 5-1, had six lengths on third-place finisher Lone Sailor.

Review of the action from Boxing Day meeting at Kempton –...