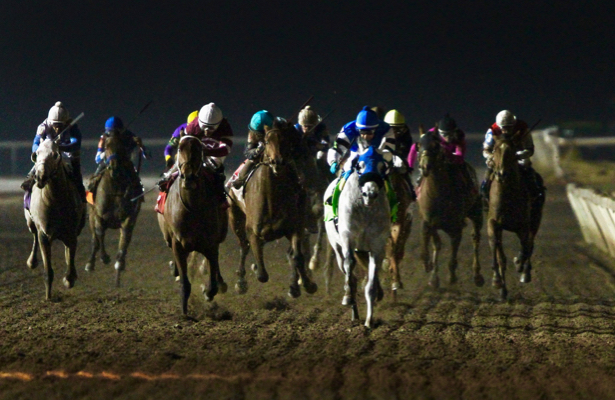 Coming out of his $400,000 Springboard Mile victory, Greyvitos is due for a freshening, trainer Adam Kitchingman told the Daily Racing Form — only connections aren’t sure yet where that will happen.

Kitchingman was among the trainers displaced by the San Luis Rey Downs fires earlier this month. While his barn wasn’t among those burned, the training center hasn’t yet re-opened, leaving Santa Anita or Del Mar the viable West Coast options.

“We plan to tack walk him to the end of the year, give him break,” Kitchingman told DRF of Greyvitos, a multiple stakes winner by Malibu Moon. “I don’t expect to work him until the middle of January. We’ve got to settle in and see where we’re training.”

An early February return to the races would make Greyvitos a possibility to continue on the road to the 2018 Kentucky Derby in the Grade 3 Robert B. Lewis Stakes, or he could sprint in the Grade 2 San Vicente also targeted by likely 2-year-old champion Bolt d’Oro. Those races run Feb. 3 and 10, respectively, at Santa Anita Park.
• Wynn Las Vegas releases updates Kentucky Derby odds

Greyvitos stretched out for the first time in his victory at Remington Park, overcoming an outside post position to follow up on his win in Del Mar’s Grade 3 Bob Hope.

In terms of other Springboard Mile runners, trainer Steve Asmussen told DRF runner-up Combatant is possible for Oaklawn’s Smarty Jones Stakes in February, while Believe In Royalty, the first foal out of Kentucky Oaks winner Believe You Can, is likely to head to Fair Grounds in New Orleans.