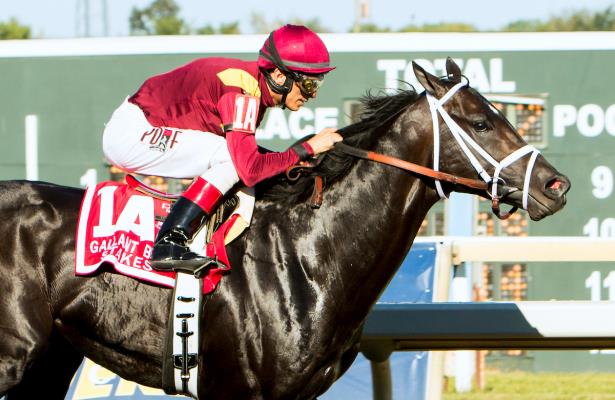 Robert LaPenta and Head of Plains Partners’ Coal Front won four of six starts in 2017 including front-running scores in the 6 ½-furlong Amsterdam (G2) at Saratoga and six-furlong Gallant Bob (G3) at Parx. The 4-year-old Stay Thirsty ridgling went unraced for more than 13 months before returning to be fifth in the seven-furlong Bold Ruler (G3) Nov. 2 at Aqueduct.

Calumet Farm’s Wild Shot ran second, third and fourth in graded-stakes at 2 and 3 before breaking through with a four-length victory in the 2017 Pat Day Mile (G3) on the Derby undercard. Winless in four starts since, he ended a 15-month break between starts running second to Copper Bullet in a seven-furlong allowance Nov. 23 at Churchill Downs.

Wednesday’s Rainbow 6 sequence spans Races 5-10, highlighted by a $47,000 optional claiming allowance for fillies and mares 3 and older at 1 1/16 miles on the newly refurbished turf course which attracted a field of 11 led by 123-pound topweight She’s Right Again.

Notes: Jacks a Warrior ($4.60) was a front-running four-length winner of Sunday’s third race, a 5 ½-furlong claimer for 3-year-olds and up, to give Shamir Maragh his first win as a trainer. The winning time was 1:06.17 over a fast main track. It was the 15th career starter for Maragh, who had seven seconds and three thirds before his breakthrough victory. Jacks a Warrior was also Maragh’s first starter, finishing fourth on Aug. 25 at Gulfstream.

Can Niigon’s Eclipse defend her Victoriana Stakes win at Woodbine?

2018 Winx Stakes: When is Winx racing today, how to watch

Laurina out to cement Champion Hurdle credentials at Sandown | Horse...