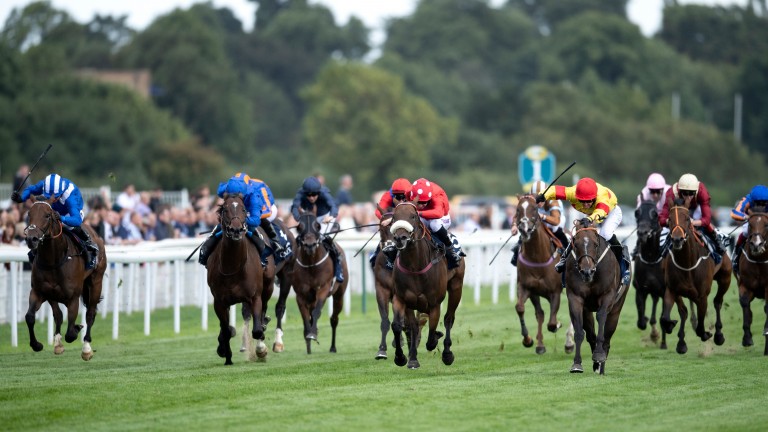 He looked the fastest horse in the world last time, but three weeks on he found three rivals too quick for him – and nobody was quite sure why.

Battaash had blasted home by four lengths in the King George Stakes at Goodwood and went off 4-5 favourite to confirm his superstar status in the Coolmore Nunthorpe Stakes.

Watch Battaash bolt up in the King George Stakes

There were none of the pre-race behaviour issues that hindered his effort when he finished fourth in this 5f championship event last year and all looked to be going to plan when he hit the front a furlong and a half from home.

Yet the awesome finishing kick that left his Goodwood rivals for dead was missing this time and he passed the post fourth once again, beaten two and a half lengths behind Alpha Delphini.

“I think he’s pretty much run exactly the same as last year,” said trainer Charlie Hills, who was at a loss to explain the result.

“He was probably last off the bridle but he just never really picked up. He seemed as good as gold afterwards.”

Jockey Jim Crowley was equally mystified and said: “I don’t know what to make of it. He didn’t get upset in any way, he travelled away nicely and was always travelling well within himself for the first half. He just didn’t have any kick.

“I was upsides the winner and he just had no kick. I don’t know why, I’m gutted. He obviously doesn’t like it up here.”

Sydney at odds over horseracing adverts on opera house roof