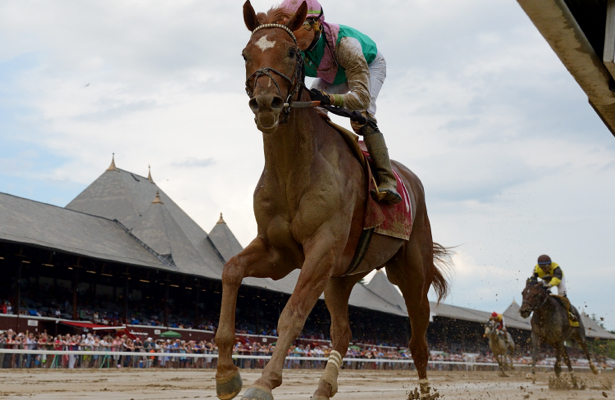 Last seen in the Triple Crown series, Hofburg again announced himself Friday as a horse capable of breaking through in a major race by coasting to a $100,000 Curlin Stakes win in the Saratoga slop.

In what was Hofburg’s first start since running third in the Belmont Stakes — and served as a prep for the Aug. 25 Travers Stakes, a Grade 1 also at Saratoga — the colt scored his first victory since a maiden-breaking win in March.

“He really was much the best in this field,” said jockey Irad Ortiz Jr. “He came from the Belmont Stakes, came back good, and if he came back 95 percent, 90 percent, he was going to be tough in the race, and he was 100 percent today. He looked awesome. He’s a nice horse.”

Settled at the back early on, the 1/4 favorite Hofburg advanced outside and in the clear up the back stretch and hit the lead at the top of the lane. Ortiz Jr. had his horse coasting at the wire, completing 1 1/8 miles in 1:50.18.

“Irad looked like he reached and gave him a couple little straps at the eighth pole just to keep him going — try to teach him and make him finish up,” said trainer Bill Mott. “It seemed like he finished up very nicely from the eighth pole to the wire, like he was doing it well within himself there.”

Nicodemus was five lengths back in second with Zing Zang third.

A field of five went postward for the Curlin, with Reride, whose connections have opted instead to go in Saturday’s Grade 2 Jim Dandy, having scratched.

The class drop certainly paid off Friday. Hofburg’s starts since breaking his maiden have all come all at the top level, with a second in the Florida Derby and seventh in the Kentucky Derby before the Belmont. The Juddmonte Farms homebred remains lightly raced and, as a son of Tapit, full of potential through six starts.

“The horse got a little hot and a little anxious and maybe even a little agitated in the paddock,” Mott said of Hofburg before the Curlin. “I think he really needed to run…When we run back in the Travers, I’d like to see him behave a little bit better — just not be so anxious.”

How To Spot a Winner in the Paddock