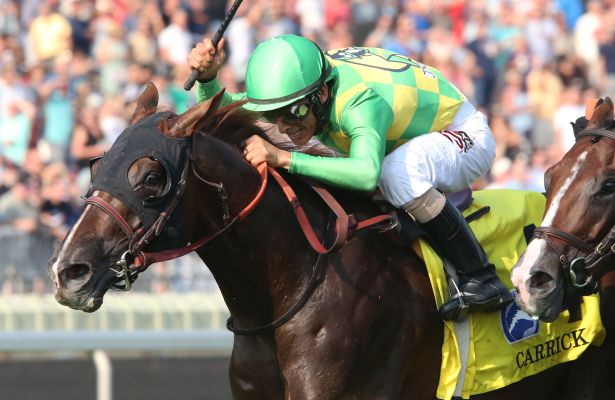 Below is a look at the field with projected morning line odds for the Hollywood Derby, which goes as Race 7 at approximately 6:30 p.m. ET:

1. Have At It, 6-1 (Kitten’s Joy – Christophe Clement/David Cohen – 9:3-3-0 – $464,240): Have At It has pieced together the most consistent run of his career recently with three straight finishes in the exacta. Additionally, he is proven at 1 1/8 miles with a win in Belmont Park’s Hill Prince (G2) and a narrow defeat in Santa Anita’s Twilight Derby entering Saturday. Have At It’s preference is to come from off the pace, and with no standout speed horse in this field, it could benefit him to be a bit more forwardly placed. Win contender.

2. Kazan, 12-1 (Shanghai Bobby – Simon Callaghan/Brice Blanc – 9:2-1-2 – $145,410): It took six tries, but once Kazan broke his maiden he started to roll, winning an allowance optional claiming race next out before finishing a respectable second in the Del Mar Derby (G2). The added distance seemed to help compared to his 2-year-old stakes misses. This one finished sixth most recently in the Twilight Derby when failing to show his usual late kick, but his jockey also dropped the whip. If you can look past that, Kazan appears to have a chance here. Live longshot.

3. Risky Proposition, 15-1 (Bodemeister – Bill Spawr/Joe Talamo – 9:3-1-1 – $109,770): This former claimer jumped up to win Del Mar’s black type Let It Ride Stakes last out, closing fast while wide in the stretch. He rallied for second one race earlier in a 1 1/8-mile allowance optional claiming race, but hasn’t otherwise had much experience at the Hollywood Derby distance. He’s preferred a closing style his last three races as compared to when running near the lead most of his career. Overall recent improvement shows, but he’ll be up against classier competition in the Hollywood Derby.  Pretender.

4. River Boyne, 4-1 (Dandy Man – Jeff Mullins/Flavien Prat – 12:6-2-1 – $511,718): River Boyne blossomed in Southern California after arriving from Ireland, and he’s never finished off the board in the Golden State. He won the Twilight Derby last out, his fourth stakes win this year, at 1 1/8 miles and had to close after turning five wide into the stretch. He edged past Have At It just in time to win. River Boyne sat closer to the pace in the Del Mar Derby and held for third, but his best running has been from the back. The top choice.

5. Fight On, 30-1 (Into Mischief – Doug O’Neill/Alonso Quinonez – 10:2-2-1 – $129,136): Fight On broke his maiden in the seven-furlong Spendthrift Juvenile Stallion Stakes a year ago in what was his final start with trainer Steve Asmussen. Since then, he has scored one other win in October in allowance optional claiming company at a mile on turf. That victory came via disqualification, and a fifth in the Let It Ride followed. Fight On’s recent running style shows him settling mid-pack or closer to the rear, but he won the Spendthrift Juvenile from just off the pace. Toss.

6. Raging Bull, 8-1 (Dark Angel – Chad Brown/Joel Rosario – 6:4-1-0 – $404,500): Raging Bull improved rapidly this year and won two graded stakes at Saratoga, the National Museum of Racing Hall of Fame (G2) at 1 1/16 miles and the Saranac (G3) at 1 1/8 miles. He disappointed as the favorite last out in the Hill Prince (G2) when fifth. Assuming he’s still in form, Raging Bull poses a big threat to rebound and upset River Boyne. Win contender.

7. Instilled Regard, 20-1 (Arch – Chad Brown/Florent Geroux – 9:2-2-1 – $404,000): This will mark Instilled Regard’s first start on the grass. While he won the LeComte (G3) early this year and rallied for fourth in the Kentucky Derby, he fell well short in his only start since May, finishing last in the Pennsylvania Derby (G1) back in September. That was also his first start for Brown since transferred from trainer Jerry Hollendorfer. He’ll need to improve greatly from the last race to contend here. Pretender.

8. Desert Stone, 10-1 (Fastnet Rock – Richard Baltas/Tyler Baze – 10:2-1-1 – $121,966): Desert Stone found a new gear when moved to the Southern California turf from New York, and his recent stakes performances have been sneaky good. In July’s Oceanside at Del Mar, he stumbled at the start, was in traffic and closed fast to finish fourth once clear, beaten just 1 ¾ lengths. He didn’t show the same rally when sixth in the Del Mar Derby but came back to run a respectable third in the Twilight Derby. He was beaten only half a length while running in between River Boyne and Have At It, nearly catching the runner-up. Board hitter.

9. Platinum Warrior, 15-1 (Galileo – John Sadler/Drayden Van Dyke – 9:2-1-0 – $83,945): Platinum Warrior has not been in the U.S. long. He raced in Ireland through June and has missed the board in his two starts stateside. He surged late to finish fourth in the Secretariat and closed to finish fifth in the Twilight Derby. Platinum Warrior is a Group 3 winner in his home country and has beaten Latrobe, who won the Irish Derby (G1). The colt is well-traveled, going from Ireland to Illinois to California. It doesn’t appear we’ve seen his best in the U.S. Use underneath.

10. Way Early, 20-1 (Tizway – George Weaver/Angel Cruz – 8:2-3-0 – $228,050): Way Early was second in the Penn Mile (G2) this year and stretched out to win a 1 1/16-mile allowance. Distance doesn’t seem like a problem, as he was beat by a nose going 10 furlongs in another start. He most recently dead-heated for fourth at Aqueduct over “good” turf and showed no kick. He’ll be trying to close on tougher competition this time in the Hollywood Derby. Pretender.

11. Carrick, 5-1 (Giant’s Causeway – Tom Morley/Kent Desormeaux – 5:3-0-1 – $310,300): This lightly raced colt, who debuted in maiden claiming company, placed himself on the map when he upset the Secretariat (G1) at 38-1, running down Analyze It by a neck. He then took on older horses in the Joe Hirsch Turf Classic (G1) but managed only sixth over a yielding turf course. Carrick should appreciate Del Mar’s firm turf off that effort and also cuts back from 1 ½ miles last out. Well rested, he’ll likely make a bid from off the pace. Win contender.

12. Pubilius Syrus, 30-1 (Candy Ride – Vladimir Cerin/Edwin Maldonado – 9:3-1-1 – $159,630): This colt looked promising at 2 and early this year, winning the Eddie Logan at a mile and the Baffle Stakes at 6 ½ furlongs. After seven months away, he stretched out in the Del Mar Derby and Twilight Derby, finishing ninth both times. Another try at the distance doesn’t look like it will get the job done. While he typically settles mid-pack, he tried to set the pace in the Twilight Derby and faded to last. Toss.

13. Prince Earl, 20-1 (Paddy O’Prado – Phil D’Amato/Tiago Pereira – 3:2-0-0 – $86,778): Distance and class are big questions for Prince Earl, who loses blinkers here, and he’s taking a major step up with the Hollywood Derby as his fourth career start. He won first out sprinting on Santa Anita’s downhill turf course, then scored at a mile in an allowance optional claiming event. He was fourth in the Let It Ride, but only beaten a length. So far, he has shown an off-the-pace approach. Pretender.

14. Californiagoldrush, 10-1 (Cape Blanco – Neil Drysdale/Rafael Bejarano – 4:3-0-1 – $322,000): This filly has hardly missed a beat during her short career. She won on debut sprinting over Santa Anita’s downhill turf course, beat winners at a mile, then ran a respectable third in her first stakes, the Del Mar Oaks (G1), against more experienced fillies. She shipped to New York for her most recent start and won the Sands Point (G2) at 1 1/8 miles over yielding Belmont Park turf. Californiagoldrush faces a tough task against the boys here, but so far has shown versatility and will have a three-pound advantage over her rivals. She’s won from off the pace and from mid-pack, and should be able to settle fine even with the far post. Board hitter.

Summary: The Hollywood Derby is comprised of a competitive bunch. River Boyne is on top of his game and has the home turf advantage, but Carrick, Raging Bull and Have At It all loom large from the East Coast. Kazan and Desert Stone also look like they are knocking on the door, though this is a tough spot, and against a large field, for that breakthrough win to happen. The filly Californiagoldrush is another intriguing prospect. She’s been impressive in her short career, but she’ll have to continue improving. As for the Kentucky Derby runner Instilled Regard, his Pennsylvania Derby performance didn’t set him up well for a return to the West Coast.