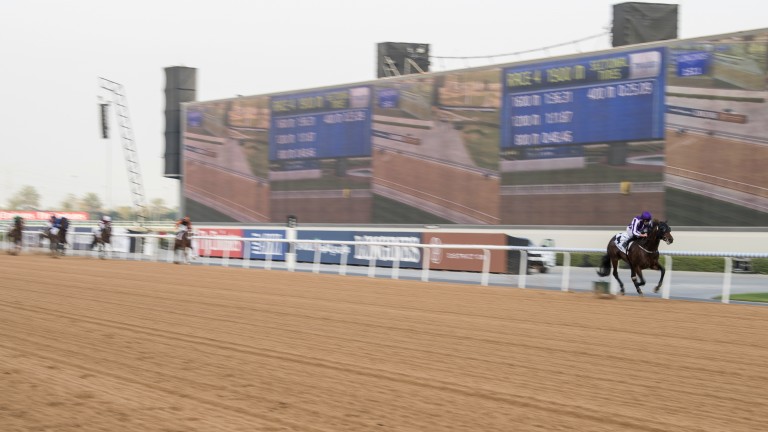 By a distance: Mendelssohn is clear of the rest in the UAE Derby

Course records galore and an almost certain bias to those prominent and on the inside line on the dirt track makes you question the reliability of the form from many races on World Cup night.

Nevertheless, it was impossible not to be impressed by Mendelssohn’s demolition job in the UAE Derby. Amazingly, he didn’t even go off favourite.

I wouldn’t be going overboard on the strength of the race with the winner already rated 12lb and 13lb higher than the second and third going into it.

Backing him to land the Kentucky Derby, one of the very few top-level races that Ballydoyle maestro Aidan O’Brien has yet to solve, is not for me.

Everything fell right for Snow

It was quite a taking move from the winner and Christophe Soumillon at the top of the home straight when kicking two to three lengths clear, but the most important move of the race was at the start when grasping the lead from stall ten.

West Coast travelled supremely well but could just not live with Thunder Snow’s finishing kick for home. He looks a mile-and-a-half horse all over but, that being said, I would not be surprised were he to turn the form around in a more conventionally run Breeders’ Cup Classic in November.

Pavel, a gorgeous grey, kept on stoutly for fourth in a battle with Breeders’ Cup Distaff winner Forever Unbridled and is worth keeping a close eye on this campaign with improvement to come.

Besides William Buick’s excellent front-running ride on Hawkbill in the Sheema Classic, the races on the turf were run at ferocious gallops. This favoured strong stayers – and Vazirabad, winner of the Dubai Gold Cup, is certainly one of those.

The Ascot Gold Cup is the aim for the Aga Khan-owned six-year-old, who is hardy, consistent and clearly a fine traveller. He is widely available at 10-1 and that appears particularly fair.

Rare Rhythm may have lost out to Vazirabad, whom he defeated in the Nad Al Sheba Trophy at the start of the month, but there was plenty of encouragement to take from his effort.

He stayed on well to the line, remains lightly raced for his age and can continue to make his presence felt.

Australian trainer Peter Gelagotis saddled his first runner at Meydan and Illustrious Lad did his team proud, posting a career-best performance to finish fifth in the Al Quoz Sprint.

The six-year-old was up with the pace the whole way and just weakened out of contention late on, but another overseas effort must be in the offing after that.

From the same race, Darren Bunyan’s Hit The Bid is without doubt worth another chance.

The four-year-old was slightly slowly into stride but travelled powerfully for a long way. He backpedalled late on but is better than he showed.