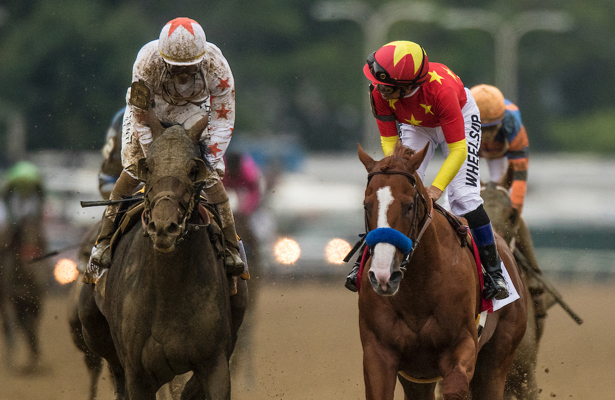 Trainer Chad Brown left the Triple Crown series believing that in all three legs, he saddled the second-best horse. And that was quite a surprise given Brown’s entry in the 2018 Belmont Stakes had never raced at longer than a mile, on dirt or in the United States.

Longshot Gronkowski’s run from last to the runner-up spot behind Justify quickly had Brown thinking not about what could have been — there appeared to be no catching the Triple Crown winner — but what may be ahead.

“One chapter is over and another one begins,” Brown said. “We look at this horse as a quality horse for the future. The way he ran (Saturday), and yes, we have some things to work on, particularly in getting better position early and stuff like that, but he’s an exciting horse and I had a lot of confidence in this horse that he would handle the dirt.

“I wasn’t sure that he was fit enough to stay the mile and a half because we only had him for a little over a month, but in his works, he showed me that he can stay on the dirt.”

A son of Lonhro campaigned by Phoenix Thoroughbreds, Gronkowski had his newest investor, namesake, Rob Gronkowski, on hand for Saturday’s race. The money didn’t quite come in as expected, with the colt off at 24-1.


Under jockey Jose Ortiz, Gronkowski essentially missed the break, working from behind the entire way.

After that, I didn’t have any choice,” Ortiz said. “I had to drop in and save all the ground.”

“Even though we warmed the horse up well in the post parade, and we kept the blinkers on him, he just didn’t break at all,” Brown added. “Then, to see a decent first quarter, but then they backed it down and nobody went with [Justify] — that was extremely disappointing. We can’t help because we were so far back. There were other riders in there that can.”

The final margin from Justify to Gronkowski, who made a big move on the rail, was 1 3/4 lengths.

Back in the spring, once it was decided the colt wouldn’t make the Kentucky Derby due to a fever, the colt was transferred from European-based trainer Jeremy Noseda to Brown. Gronkowski’s new trainer — Brown won his first Triple Crown series race in 2017 with Cloud Computing — saddled champion 2-year-old Good Magic in this year’s Derby and Preakness.

“You’ve got to run against everybody and it only takes one good one to beat you,” he said of Justify, adding that “we ran into a real buzz saw.”

Good Magic returned to the work tab Sunday morning toward a start in the Grade 1 Haskell Invitational on July 29. Now, Gronkowski’s presence in the barn could give Brown an entry in other top summer fixtures for 3-year-olds.