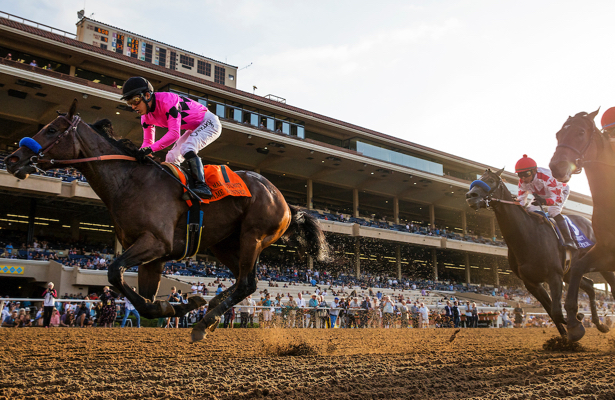 A Grade 1 race for 2-year-olds at 1 1/16 miles, the CashCall Futurity and the Starlet, a Grade 1 for 2-year-old fillies at the same distance, highlight the upcoming Winter meet at Los Alamitos, which begins Thursday, Dec. 6, and continues through Sunday, Dec. 16.

Both the Futurity and Starlet will be run Saturday, Dec. 8.

Included among the 54 nominated to the Starlet are Bellafina, winner of the Grade 1 Del Mar Debutante on Sept. 1; Chasing Yesterday, a half-sister to 2015 Triple Crown winner American Pharoah; Debutante runner-up Mother Mother; and Brill, who was fourth as the favorite in the Debutante after an impressive first out victory.

Besides Game Winner, who began his career with an easy maiden victory Aug. 18 on the Pacific Classic undercard, Hall of Fame trainer Bob Baffert, who has won the Futurity all four years it has been run at Los Alamitos (2014-2017), nominated 24 other juveniles.

The complete list of nominations for the CashCall Futurity and Starlet can be found at LosAlamitos.com/TB/StakesNoms.

Latest horse racing results: Who won the 2.05 at Kempton live...