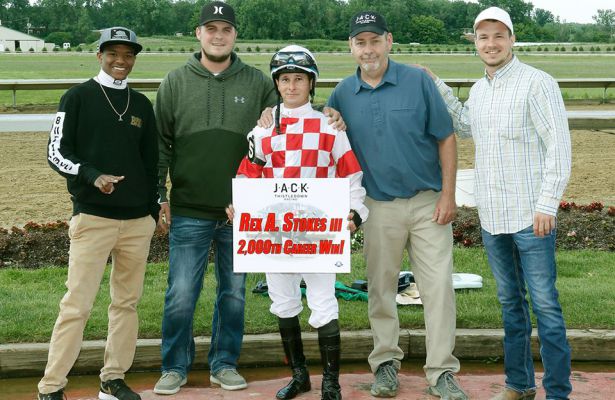 Jockey Rex Stokes III earned his 2,000th career victory in spectacular fashion Wednesday when Blazen Betsy set all the pace and crossed the wire 13 1/4 lengths the best in the eighth race at JACK Thistledown Racino.

“It was great,” said Stokes. “It was like the first win. I enjoy every win I get and this is a nice milestone. I lost my sister, Josie, last week, so I was trying to keep it together because I was dedicating it to her.

“I want to thank my family for all their support through my career, the owners and trainers who trust me with their horses, my agent, Justin Poole, and my valet, Mr. Rusty (McKeever).”

Stokes, 34, hails from Louisiana’s Cajun country, a geographical gold mine that also has produced such renowned riders as Randy Romero, Calvin Borel, Eddie Delahoussaye, Robby Albarado and Kent Desormeaux. The racing bug also bit genetically; Stokes’s father, Rex Stokes Jr., is a former jockey and trainer, his brother Louis rode from 1998 to 2015 and his brother Joe, who began riding in 1997, still rides.

Rex Stokes III began getting on his dad’s horses at age 13 at the Breaux Bridge, La., farm where the elder Stokes trained. Too small to take out his jockey’s license when he legally was eligible—he weighed only 83 lbs. at age 16—he began his career in 2000 at age 17, riding first at Beulah Park in Ohio, where the family had moved. He won his first race in November of that year aboard Oil Tycoon, a horse trained by his dad and co-owned by his mother, Katherine. He finished 2001 as the nation’s second-leading apprentice jockey by wins with 201, an 18 percent strike rate.

Stokes’s first stakes win came in 2002 aboard Disappearance in Beulah’s Edward Babst Memorial Handicap, and he broke his maiden in graded stakes with Spruce Run in the 2005 Robert F. Carey Memorial Handicap (G3) at Hawthorne. In 2007 Stokes won four undercard stakes on West Virginia Derby day at Mountaineer and finished second in a fifth. He has earned several leading rider titles at Mountaineer and one at Turfway Park.

Stokes makes his home near Akron, Ohio, with his wife, Sarah.

Blazen Betsy is owned by Southern Comfort Stable LLC and trained by Doug Cowans. The 3-year-old Kentucky-bred Speightstown filly was making her second career start. She was sent off at 1-9 in the milestone win and finished the six furlong race for fillies and mares 3 years old and up in 1:11.00.

Good Magic cruises to Haskell 2018 win; ‘it worked out perfect’

Presenting Percy and Kemboy could clash at Leopardstown – Horse Racing

Courier Journal reporters show how not to bet on horse races