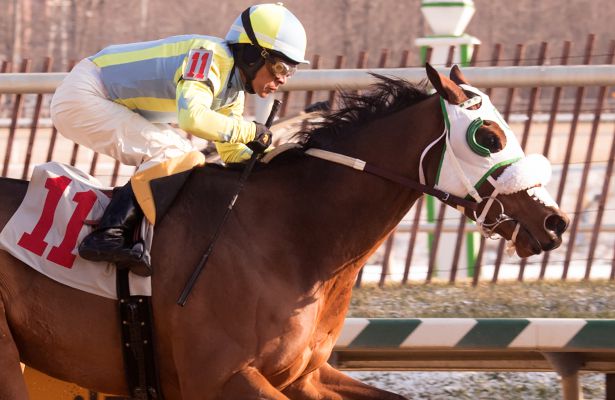 Winless in seven starts this year, Matthew Schera’s multiple stakes winner John Jones looks to end that drought in a familiar place as he goes after his third consecutive victory in the $75,000 Jennings Stakes Saturday at Laurel Park.

The Jennings for 3-year-olds and up is the first of two stakes for Maryland-bred/sired horses on the 10-race Christmastide Day program, followed by the $75,000 Politely for fillies and mares 3 and older at six furlongs. First race post time is noon ET.

John Jones won each of his first four starts after being claimed by trainer Lacey Gaudet in July 2016, including his and her first career stakes victories in the Mister Diz, defeating late legend Ben’s Cat. They capped the year with a front-running five-length romp in the Jennings.

Last year, John Jones got off to a late start and didn’t race until early October but ended his season with a 2 ¼-length triumph in the Jennings, besting 10 rivals including fellow multiple stakes winners Talk Show Man and Sonny Inspired, Rockinn On Bye, Clubman and Final Prospect – all of whom return this year.

“This has always been his race, so hopefully it can be again. It would definitely be nice. This is the first year he hasn’t had a win yet, so we hope he can get that done,” Gaudet said. “He worked really good the other morning and had a nice tune-up for the race, so we’re looking forward to it.”

John Jones owns seven wins from 11 starts going a mile on the dirt at Laurel, and was beaten a neck when second in his most recent attempt, an off-the-turf edition of the Find Stakes Sept. 29 behind Sonny Inspired. He has had five weeks since finishing sixth in the 1 1/16-mile Swatara Stakes Nov. 21 at Penn National.

“He’s been doing good. We knew that the race at Penn was going to be tough, and a little bit longer than he wants,” Gaudet said. “We just wanted to give him a race to use as a stepping-stone to get ready for this race again. The mile at Laurel against state-breds is perfect for him.”

Laurel’s fall meet-leading rider Trevor McCarthy will be aboard for the third straight race, breaking from Post 2 in a field of eight at 120 pounds.

Carrying topweight of 122 pounds, including jockey Jorge Vargas Jr., from Post 5 will be Dr. Michael J. Harrison’s homebred Talk Show Man. Trained by Hamilton Smith, the 8-year-old Great Notion gelding was never involved when ninth in the 1 1/8-mile Richard W. Small Stakes Nov. 10 at Laurel, his return to dirt after his second career victory in the Maryland Million Turf Oct. 20.

Talk Show Man owns three wins on dirt and is seven-for-13 with three thirds going one mile. He has had two bullet breezes since his most recent start, going five furlongs in 1:00 Nov. 24 and seven-eighths in 1:29.40 Dec. 18.

“The last race was a throwout,” Smith said. “He’s a better horse on the grass, but we didn’t get much of a chance to get on it this year. We’ll put him up against the Maryland-breds and see how he does, and Dr. Harrison will probably take him back to his farm after that.

“He really moves up on the grass, but he can run on the dirt, too,” he added. “The one-turn mile kind of favors speed horses a little bit but he’ll run his race, I think. He worked good for me the other day. He handles the dirt in the mornings, so we’ll take a shot. It’s a pretty competitive spot.”

Completing the field is Big Bertha Stable’s Taco Supream, Laki’s stablemate who was a 2 ¼-length starter optional winner going 5 ½ furlongs last out off back-to-back runner-up finishes by a neck at six furlongs.

Fellow multiple stakes winners Crabcakes and My Magician are among eight rivals looking to Limited View’s return to competition in the $100,000 Politely.

Rainy weather caused trainer Bernie Houghton to scratch Morgan’s Ford Farm’s Crabcakes from the open Willa On the Move Stakes Nov. 24 at Laurel and he has been pointing since for the Politely.

All four of Crabcakes’ career stakes victories have come over Laurel’s main track, where she has seven wins and three seconds from 10 tries. A half-length winner of the seven-furlong Maryland Million Distaff Oct. 20, the 4-year-old Great Notion filly returns to a six-furlong distance where she is six-for-10 lifetime with two seconds and a third.

“We’ll probably give her a little rest after this, but she’s been in training, no problems, and she’s doing great,” Houghton aid. “She was real impressive last time, so I expect her to be pretty tough in the race Saturday. She’s as competitive as ever. She’s in good form these days.”

After winning four of nine starts in 2017 with three seconds and a third, Crabcakes didn’t get going until July but has won three of her four starts this year. The only loss came when she was second by a length in the Jameela Stakes Aug. 18 – her first and only try on the grass.

“She hasn’t run much this year and that was not by design, it just happened to work out that way,” Houghton said. “I told the owners, I don’t see why we couldn’t get another year out of her before we make her a broodmare. As long as she stays sound and there’s no problems, I’m going to keep running her. She’s fun to have around.”

Forest Boyce has the return call on Crabcakes from Post 3 of nine at topweight of 122 pounds.

“I sent her to the farm for 60 days after her last race. There was nothing wrong. I always wanted to give her a little time but I was always scared with her personality that I was going to be sick if I sent her to the farm and she ran through a fence something like that,” Salzman said. “Finally the owner said something to me and I said, ‘We’ll do it, but I don’t know what to tell you to expect.’ She actually went out there and loved it. She came back and she still has a few quirks but I think she’s a little more mature now.”

Limited View won the Maryland Million Lassie and Maryland Juvenile Filly Championship at 2, and this year was second in the one-mile Beyond the Wire and third in the seven-furlong Alma North. Salzman wonders if those efforts, coupled with wins in the Marshua and Politely, would push her to state-bred honors.

“I’m wondering if she’s got a chance to be the 3-year-old filly champion. She did win the open stake and was second in the race going a mile. She sort of tailed off a little bit in her last two races but she didn’t embarrass me or anything by any means,” he said. “[We] have to hook Crabcakes but it’s going to have to happen eventually, anyway. We’ll see.”

Defending champion My Magician is winless since her neck victory in the Politely last December. The 6-year-old Street Magician mare has run six times in 2018, finishing second to Crabcakes in the Maryland Million Distaff and third in the What a Summer, Conniver and Nov. 24 Geisha Stakes at Laurel, as well as the Sept. 22 Pink Ribbon Stakes at Charles Town.

Multiple stakes winner Anna’s Bandit, who beat My Magician in the Conniver March 17; She’s Achance Too, Elevated Vision, Hailey’s Flip, If I Was a Boy and Phantom Shot are also entered.

Sheikh Mohammed horses to run under Godolphin banner in Japan |...

Robert Levy dies at 87; businessman and philanthropist made his mark...

Forty Under closes to take Pilgrim Stakes at Belmont Park