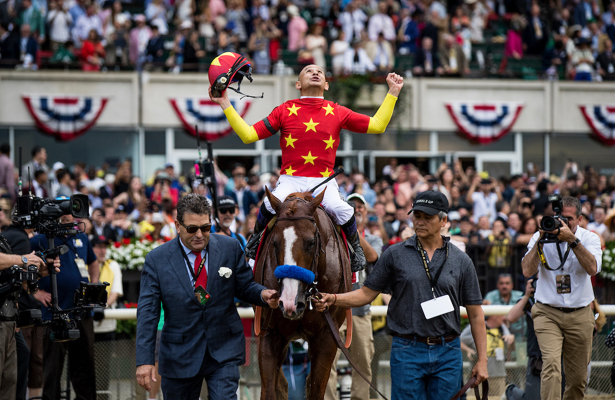 Continuing a tradition started at the inaugural Equestricon racing convention, fan festival and trade show, organizers for the event announced Friday that the team behind Justify will celebrate his historic Triple Crown run with attendees at Equestricon. In a press conference today, WinStar farm revealed it will bring trophies from Justify’s Triple Crown campaign to the convention on Tuesday, October 30, and participate in an autograph signing expected to feature the horse’s owners, jockey Mike Smith and trainer Bob Baffert. Proceeds from the autograph signing will benefit the Permanently Disabled Jockeys Fund (PDJF).

“The PDJF congratulates Justify, WinStar Farm, and all the horse’s connections on his historic victory and thank them for their generosity in inviting racing fans to get up close to Justify’s trophies at Equestricon 2018,” said PDJF President Nancy LaSala. “We appreciate their support of our permanently disabled riders and also thank the organizers of Equestricon for what will surely be a must-attend event.”

Equestricon will serve as the anchor event for the Breeders’ Cup Festival in Louisville this year, beginning Monday, October 29, at the Kentucky International Convention Center (KICC). In addition to the Justify trophy exhibit, photo opportunity, and autograph signing for the PDJF on the second day of the convention, Equestricon will also feature Breeders’ Cup trophy photo opportunities, along with dozens of leading jockeys, trainers and other major racing personalities who’ll be available during signings, meet-and-greets, workshops and panels.

At the inaugural Equestricon, attendees were treated to the opportunity to take their photo with the Kentucky Derby trophy of Always Dreaming, along with an autograph signing benefitting PDJF. This year, the ownership team behind Justify includes WinStar Farm, Starlight Racing, China Horse Club and Sol Kumin’s Head of Plains Partners. WinStar and Starlight are returning participants in Equestricon, with Starlight having sponsored the convention last year and WinStar a part of the popular “Horse Country Row” installation featuring prominent Kentucky farms.

“We’ve truly enjoyed being a part of Equestricon and seeing it achieve its mission of bringing fans into the fold at every level of the sport,” said Elliot Walden, WinStar Farm President/CEO and Racing Manager. “It’s an honor and blessing to be able to share Justify and the ride he’s taken us and all of our partners on. Most importantly, we’ve always been big supporters of the PDJF and this allows us another opportunity to raise funds and awareness about the vital work they do in advocating and caring for our jockeys.”

The PDJF will also be represented at Equestricon with an exhibit in the trade show portion of the convention at KICC, which will feature more than 100 racing organizations, racing and equine products, farms, racetracks, fashion brands, and an array of services for horseplayers and bettors. The Thoroughbred Aftercare Alliance, the Official Charity Partner of Equestricon, will bring together a large gathering of accredited charities to raise awareness about aftercare and second careers for racehorses.

Organizations or businesses interested in participating in Equestricon may browse the event’s sponsorship packet (below) or contact Event Coordinator Dan Montesano at dan.montesano@equestricon.org.

45 at Leicester live on ITV TODAY?