The Lecomte, run at a mile and 70 yards around the New Orleans oval, draws Saturday, and final calls are on their way to out-of-town barns that could be interested in shipping for the race. Just last year, Jerry Hollendorfer sent Instilled Regard, the Derby’s eventual fourth-place finisher, from his California base for the win.

The current list of probables is topped by Mr. Money, fourth in the Breeders’ Cup Juvenile; Plus Que Parfait, just a neck behind Signlaman in the Kentucky Jockey Club Stakes (G2); and War of Will, a Mark Casse trainee who has run at the highest level on turf — but broke his maiden last out in a race switched to the main track.

From there, other possible runners include locals Chase the Ghost, Hog Creek Hustle, Malpais, Manny Wah, Mo Speed, Roiland, Tight Ten and Tackett. Admire, a Churchill Downs maiden winner based at Gulfstream Park with trainer Dale Romans, will ship in. Keith Desormeaux’s Night Ops — a maiden who would be making his sixth start — could also come from California.

Any number of horses based in Louisiana may also fill the entry box considering early bird nominations for the Louisiana Derby (G2) cover the nomination fee for both the Lecomte and the Risen Star (G2). 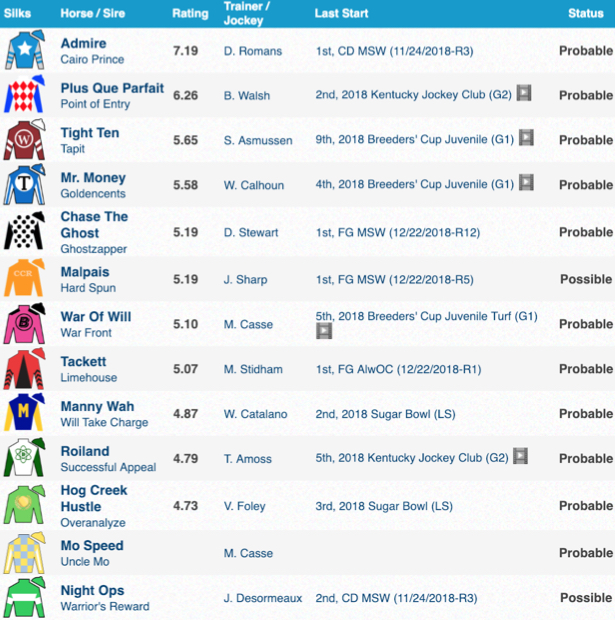 In this, one of the rare weeks when we don’t have a prep to look forward to, we’re happy to look ahead. Nominations also closed Thursday for Oaklawn Park’s $150,000 Smarty Jones Stakes on Jan. 25. B P Rocket has started twice, improving dramatically second out to win Nov. 9 at Churchill Downs.

“His chink in his armor when he first came up was the gate,” said trainer William Van Meter. “He’s one of those horses, the first time you do something with him, he’s like, ‘Whoa!’ And then the second time you do it with him, he has a kind of a sharp learning curve.

“Second time you do something with him, he really comes on.”

Others targeting the Smarty Jones include Gray Attempt, winner of Fair Grounds’ Sugar Bowl Stakes, and Super Steed, who was fourth in that race. The Paul Holthus-trained Six Shooter comes out of a win in Delta Downs’ Big Drama Stakes last Saturday night, while Steve Asmussen has Long Range Toddy and Bankit, the 1-2 finishers of the Springboard Mile at Remington Park, on the work tab at Oaklawn as well.

That’s not to mention the inevitable Bob Baffert-trained shippers.

The Lecomte and Smarty Jones are the final preps in January before a massive Saturday, Feb. 2, on which each of the Withers (G3), Holy Bull (G2) and Robert B. Lewis (G3) run.

• Given the UAE Derby’s boost to $2.5 million this year, you had to know this news was coming: The Kentucky Derby will be worth a record $3 million in 2019, given a boost after the installation of historical horse racing machines near the track.

• Global Campaign, the half-brother of Bolt d’Oro who bounded onto the Derby Radar last weekend with an easy debut win at Gulfstream Park, will stay sprinting in his next start in the Swale Stakes (G3), trainer Stanley Hough told the Daily Racing Form.

• Walking Thunder stamped himself as one to watch Thursday when rolling to a nine-length win — in a field that included a Group 1 winner — in the UAE 2000 Guineas Trial at Meydan. Now, let the debate begin as to whether he’s a legitimate prospect.

Cornacchia — The Brad Cox trainee overcame plenty of trouble to win on debut Dec. 22 at Fair Grounds, and he’ll carry high expectations into a Jan. 17 allowance start against Gun It, the $2.6 million yearling from Gun Runner’s family. This son of Tapit posted his first work back Thursday, drilling five furlongs in 1:01.20.

Moretti — Bound for the Withers, the 1 1/8-mile maiden special weight winner began serious preparations Thursday by drilling a half mile in 50.28 seconds at Belmont Park, where trainer Todd Pletcher has the $900,000 colt based so far this winter.

Mucho Gusto — A day after Game Winner and Improbable returned to work for the Baffert barn, this Derby trail runner did so, too. He’d certainly make sense in the Smarty Jones, and the Grade 3 winner tuned up Thursday with five furlongs in 1:02.00 at Santa Anita Park.

In case you missed it…

El Astronaute ready for lift off in Listed sprint feature |...