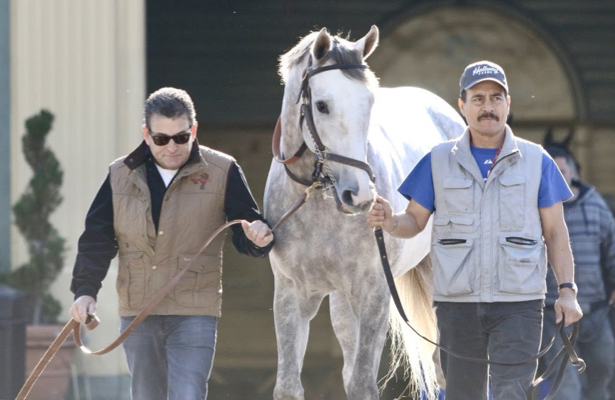 Coliseum returned to the work tab Sunday and did so, appropriately, with a breeze from the gate.

Jimmy Bell, Godolphin’s U.S. president, reiterated that trainer Bob Baffert will wait for another work or two to decide what’s ahead for the flashy maiden winner who lost his encore, the Jan. 5 Sham Stakes (G3), at the break.

“The jury’s still out on what the next spot will be,” Bell said, adding that Baffert needs time “to sort of figure out where he is both physically and mentally. I think Bob’s learned a lot about him just since that race.”

Even after finishing sixth as the favorite behind Gunmetal Gray in the Sham, Coliseum did nothing to suggest to his connections he’s any less gifted than the horse seen on debut. Back in November, the son of Tapit emerged an easy 6 3/4-length winner of a maiden special weight flight at Del Mar to ignite some 2019 Kentucky Derby dreams.

That day, Coliseum dodged his issues at the gate. In the Sham, he looked less than alert getting away.

“Things went sort of South from there, so I think Bob was going back to the drawing board to figure the horse out,” Bell said. “It’s a process. The good news is, he came out of his race in good shape. He’s a healthy, happy horse.

“We’re just sort of learning more about him as we go along. Obviously we still feel like he’s really talented. We really hope to have him be a little more professional the next time he steps over there.”

Baffert said Monday that Game Winner, the 2-year-old champion in waiting, is “right on schedule” for a start in the San Felipe (G2) on March 9. That means Improbable, another unbeaten sophomore in the barn, could ship for the March 16 Rebel Stakes (G2) at Oaklawn Park with both expected to run twice before the first Saturday in May.

Decisions await on a number of other talented Baffert 3-year-olds. As for Coliseum, “When Bob sees what he wants to see,” Bell said, “I think he’ll pull out the condition book.”

A Godolphin homebred, Coliseum clocked five furlongs in 1:00.80 in his first drill back. On video provided by XBTV, the break looked similar to the Sham, as he began well back of 4-year-old workmate Heck Yeah. But Coliseum quickly caught and passed his stakes-winning rival. Heck Yeah pulled even when Coliseum came wide off the turn, but the flashy gray flew back on by and galloped out well ahead. 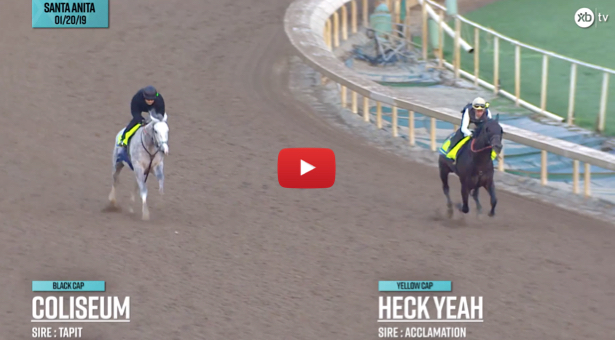 The mental side of Coliseum’s game could remain a topic of conversation — and for connections, consternation — on down the Derby trail. If he gets it right, well, maybe you can draw a line through that Sham effort.

“I sure hope we can look back and say that for sure, because it was over pretty quickly,” Bell said. “You could just see the way he handled himself throughout. He was out of sorts. Listen, that was his second lifetime start. This is all very new. Even though he’s a newly turned 3-year-old, he’s inexperienced.”

As for the Sham winner, Terry Finley, president and CEO of West Point Thoroughbreds, said the ownership group that also includes trainer Jerry Hollendorfer is leaning toward the Feb. 2 Robert B. Lewis (G3) for his next start.

The son of Exchange Rate also returned to work Sunday with five furlongs in 1:02.80.

“I actually talked to Jerry after the work, and ultimately the decision’s going to be Jerry’s,” Finley said. “But I know that he is really interested and intrigued by the race in early February out there.”

• Get a look at an early Smarty Jones Stakes pick via our Super Screener handicapping system, which expects a six-furlong stakes winner to stretch his speed.

• Hog Creek Hustle will remain on the Derby trail, trainer Vickie Foley says, with the Lecomte (G3) runner-up set for a rematch with War of Will.

• HRN’s Bryan Brinkmeyer runs down what we learned on the Derby trail from the last week, including a points update.

Big Scott Daddy — This Dec. 26 debut winner had Mike Smith in the irons and could be headed for a race like the Robert B. Lewis, too. He breezed 5/8 Monday in 1:01.20 for trainer Mike Puype.

Come On Gerry — Another recent maiden winner, this one Dec. 28 at Gulfstream, remained on schedule for a start in the Feb. 2 Holy Bull (G2) by breezing five furlongs Tuesday in 1:01.63 at Gulfstream Park.

Mucho — One of Bill Mott’s top 3-year-olds, the Grade 1-placed son of Blame upped his distance to a half mile Monday at the Payson Park Training Center, clocking in at 50.20 seconds.

Mucho Gusto — In his fourth work since a runner-up to Improbable in the Los Alamitos Futurity (G1), this Baffert runner breezed 7/8 Monday in 1:26.40. His next race spot is to be announced.

Tacitus — Another trained by Mott, the first foal out of Close Hatches mirrored Mucho’s distance and time on Monday at Payson Park. This Tapit colt has been off since his second out win on Nov. 10.

In case you missed it…

BHA forced to row back on chief executive’s comments on whip...