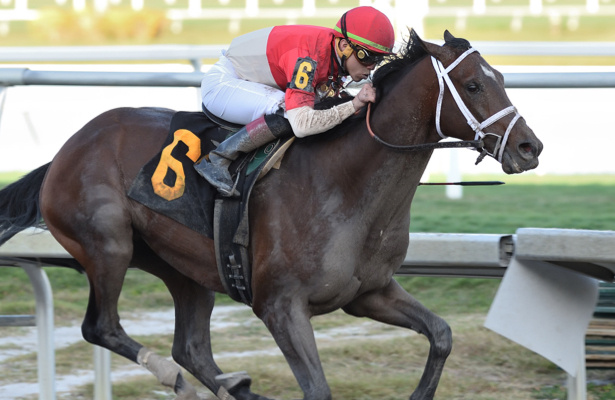 Irad Ortiz Jr. didn’t think Bourbon War ran poorly in the Remsen Stakes (G2) — only that due to a slow break and dawdling pace, the colt really didn’t get to run at all. The son of Tapit showed there’s plenty in reserve Friday afternoon in an impressive 3-year-old debut at Gulfstream Park.

Bourbon Lane Stable and Lake Star Stable’s Bourbon War dealt with traffic and dirt in his face before going on to a 2 1/4-length score in the featured ninth race, an allowance optional claiming event for 3-year-olds.

From here, it’s back on the 2019 Kentucky Derby trail.

That sets up Gulfstream’s Fountain of Youth (G2) on March 2 as a logical next spot.

“We’re going to see how it stacks up,” Hennig said, “but we’ll nominate him up to all these 3-year-old races. I think he’s ready to take the step back into graded stakes company.”

Bourbon War broke sharper than in his fourth-place Remsen effort, settling off the pace as a 3-2 favorite in the field of nine. He split horses up the back stretch before passing rival Cutting Humor to post a mile in 1:37.19.

“I was glad he kind of got through that little hole,” Hennig said. “I was like, ‘Is there a hole here turning for home, or not? Don’t get stopped.’ It worked out good.”

Bourbon War debuted Nov. 14 in a maiden special weight event at Aqueduct taken off the turf. In that race, he beat, among others, Moretti, a Todd Pletcher trainee who cost $900,000 at auction, graduated in his second start and is targeting the Withers Stakes (G3) next.

Given the strong first out showing, connections wheeled back Bourbon War for the Dec. 1 Remsen.

Even in defeat, “I was very positive with the horse,” Ortiz Jr. said Friday in a TVG interview.” I told Mark, ‘The slow pace killed me today, but next time, probably, with a fair pace he’ll give you a ride.’”

And Bourbon War did.