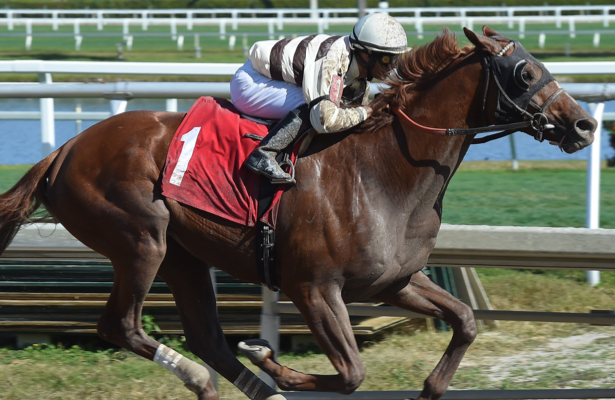 Country House veered inward leaving the gate Thursday in Gulfstream Park’s third race, with the start setting him well back of five rivals. But a patient ride by jockey Luis Saez, along with a last-to-first rally by the Bill Mott trainee, landed him in the winner’s circle — and on the 2019 Kentucky Derby Radar.

“He was quite a way’s out of it,” the trainer added of the start. “I didn’t think it was over, but it certainly compromised his chances.”

A son of Lookin At Lucky, Country House re-joined the field after Ownitifyouwantit set an opening half mile in 49.07. From there, he just kept driving. The colt quickly circled the field once midway through the far turn, and he found the lead by the top of the lane.

One crack of the whip straightened Country House heading down a short stretch run before the colt hit the first finish line in 1:44.99 for 1 1/16 miles.

Campaigned by Mrs J. V. Shields and E J M McFadden, Country House was making his third start and certainly flattered his competition from the last race. Godolphin’s Kentucky Wildcat topped Country House by a half length in a Dec. 1 maiden special weight event where it was another five lengths back to third place.

In his victory, Country House covered 40 feet more than runner-up Ownitifyouwantit, according to Trakus data.

Is the Derby trail next?

“Definitely we’re going to spend 600 bucks to nominate him for sure,” Mott said of the upcoming Triple Crown deadline.