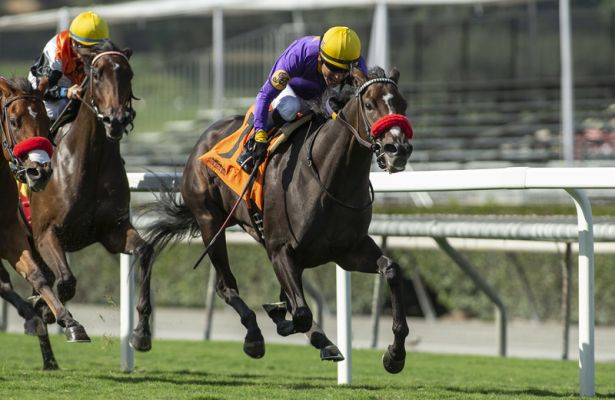 At 33-1, the longest shot in a field of six juvenile fillies in Monday’s $100,000 Surfer Girl Stakes at Santa Anita, Lakerball sped to the lead from her outside post and held sway throughout under Mario Gutierrez, winning by a head as heavily favored Summering could manage no better than a third place finish under Drayden Van Dyke.

Trained by Doug O’Neill, Lakerball got a mile on turf in 1:35.23 and provided her sire, the late running sprinter Lakerville, with his first stakes winner from his first crop to race.

“We talked in the paddock and it looked like (trainer Tom) Proctor’s horse (Summering) was the speed and we thought maybe we’d be sitting just off of her,” O’Neill said. “As it turned out, Van Dyke didn’t go, Mario took the lead, was able to save ground and it worked out.

“It’s great to get the first win for this stud, Lakerville, and we’re happy to have Janie Buss as part-owner. Her sister, Jeannie, is on TV all the time, but Janie does all the charity work for the Lakers and it’s great to have her as a part of this. She races as Purple Rein Racing.”

A California-bred maiden $50,000 winner going 5 ½ furlongs on dirt two starts back Aug. 8, she was well beaten versus state-breds in a first condition allowance at the same distance on Sept. 2. In her first try on grass and around two turns, Lakerball, in her fourth career start, paid $69.60, $27.00 and $5.00.

Also owned by Pappas Racing and Tom Roberts, Lakerball is out of the Capsized mare Category Ten. With the Surfer Girl win, she picked up $60,000, increasing her earnings to $84,480 while improving her race record to 4-2-0-1.

Ridden by Joe Talamo, Irish-bred Lady Prancealot was next to last after the first half mile and held off Summering by 1 ½ lengths for second money. Off at 7-2, Lady Prancealot paid $5.40 and $2.20.

Although many expected heavily favored Summering to go to the early lead, she was in-hand into the Club House turn and never seemed entirely comfortable while lugging in a bit through the lane under Van Dyke. Off at 2-5, she finished three quarters of a length in front of Miss Bigly and paid $2.10 to show.

“The big key was getting over to the rail going into the first turn,” Gutierrez said of riding Lakerball. “From there, she was happy and she ran really game.”

As for Summering, Van Dyke said, “I thought I was gonna be able to angle out there in the lane, but she was kinda leaning in with me and I couldn’t get her out. Other than that, I thought we had a good trip.”

Who won the 3.00 Golden Mile at Glorious Goodwood live on...

Tough hurdler Lil Rockerfeller gets the go ahead for chase debut...

‘What a ride’; Catholic Boy’s groom enjoys his success

Dunkerron can gain a deserved win in the Solario Stakes at...