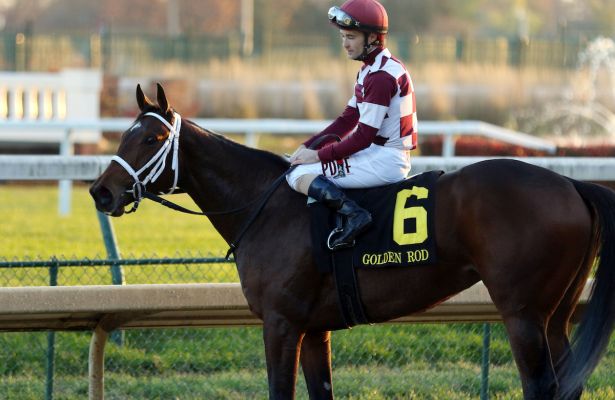 The 2-year-old daughter of Candy Ride (ARG) broke her maiden at third asking over the Churchill Downs main track on Oct. 28 by nine lengths before her triumph in the Golden Rod.

Trainer Wayne Catalano believes that Liora could follow in the footsteps of five-time graded stakes winner Farrell, who won the Golden Rod Stakes in 2016 and took all three local preps on the Road to the Kentucky Oaks the following year.

“She was training pretty doggone well so we wanted to give her a shot,” Catalano said. “I thought to myself that she could be the next Farrell. She ran a couple nice races. Her maiden win was very impressive and obviously the Golden Rod was a great race and a great ride by Channing Hill. The whole connections did a great job with her.”

“We have a great relationship,” Catalano said. “Bob Cummings and Ms. Annette (Bacola) are wonderful people. They’re like family and we’ve been together for a long, long time so we’re very happy and fortunate to be working with them and being involved with people like that.”

Liora was bred by Dell Ridge Farm and was purchased for $175,000 from the Keeneland September Yearling Sale in 2017 where she was consigned by Lanes’ End Farm. She is out of the Giants Causeway stakes winning broodmare Giant Mover, who produced two-time graded stakes winner and Catalano trainee Family Tree.

Catalano could not have been any happier with the career debut of
Winter Sunset, who won first time out over the Stall-Wilson Turf Course at Fair Grounds Race Course & Slots on Thursday afternoon.

Breaking from the rail under Hill, Winter Sunset was sent straight to the front and glided home to victory by 4¼ lengths in wire-to-wire fashion in a 7½-furlong maiden special weight event over the Stall-Wilson Turf Course.

“She’s got the pedigree to be a nice filly and she had trained that way,” Catalano said. “Obviously we were very happy with her performance. She ran like she thought she might run, which was to her pedigree so we were excited about her.”

Owned by Coffeepot Stables and Phillips Racing Partnership, the 2-year-old daughter of Tapit boasts a highly prestigious pedigree. She is out of the two-time Grade 1 winning broodmare Winter Memories, who won the Garden City Stakes during
her sophomore campaign and took the Diana Handicap at age four. Winter Sunset’s maternal grand dam was Memories of Silver who also was a two-time Grade 1 winner on grass.

“We were ecstatic to get her,” Catalano said. “She was a ($900,000) RNA (at the Keeneland September Yearling Sale in 2017). (Owner) Bob Cummings and the seller made some kind of deal and my name was mentioned so that I could train her when
they bought her.”

Although Winter Sunset qualifies for a first level allowance event, Catalano did not rule out running her against stakes company for her next start.

“We may go right to a stake race but we don’t know yet,” Catalano said. “We might take a shot at some heavy hitters. We’ll see what’s available.”

Fractured hock likely to rule Maria’s Benefit out for the season...

Waldgeist enters reckoning for horse of the year honours | Horse...