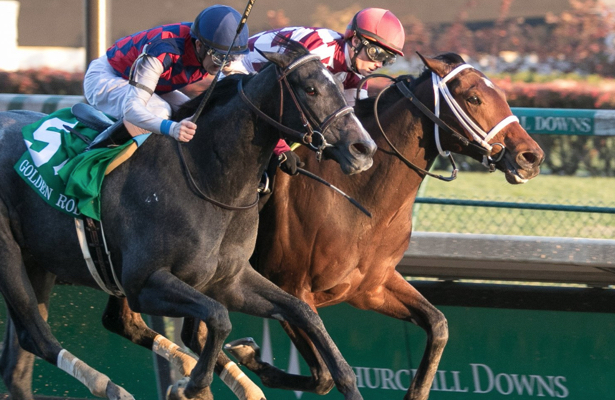 When it comes to conditioning Thoroughbreds, a handful of trainers all follow a similar philosophy – run them when they’re doing well and rest them when they’re not. This is one reason why Wayne Catalano made the last minute decision to
enter graded stakes winner Liora in Saturday’s $150,000 Silverbulletday Stakes.

The original plan with the Coffeepot Stables-owned daughter of Candy Ride (ARG) was to train up to the $200,000 Rachel Alexandra Stakes (G2) on Feb. 16, but when Catalano saw how well she was training and noticed a light list of
probable entrants for the mile-and-70-yard event, he altered her hopeful route to the Kentucky Oaks.

“We looked at the race and there ended up being seven in there,” Catalano said. “She’s training great. When they’re doing great like that you got to run them, it’s what you got to do. We don’t have to ship her or anything so we’re running.”

In her most recent work, Liora breezed five furlongs in 1:01.40 on Sunday morning under jockey Florent Geroux.

“She looked great, Florent was happy with her,” Catalano said. “She’s not a real big work horse and will probably be better with company, but she got out of the work what we wanted her to.”

Liora gave Catalano his third victory in the last five editions of Churchill Downs’ Golden Rod (G2), where she was 29-1. His other two wins in the event came with West Coast Belle (2014) and Farrell (2016), the latter of whom was also
owned by Coffeepot Stables and swept the series of local preps on the Road To The Kentucky Oaks in 2017. Could Liora follow in Farrell’s footsteps?

“She’s not as hyper as Farrell but we’re hoping she’s as good as her,” Catalano said.

Regular rider Channing Hill has the mount for the Silverbulletday Stakes, where she is the 5-2 favorite.

Liora is a half-sister to another notable Catalano trainee in two-time graded stakes winner Family Tree. Both are out of the Giant’s Causeway broodmare Giant Mover whose dam is six-time graded stakes winning millionaire Gold Mover. Liora
was bred in Kentucky by Dell Ridge Farm and was purchased for $175,000 from the Keeneland September Yearling Sale in 2017 where she was consigned by Lanes’ End.

After the Silverbulletday, Catalano will saddle Manny Wah in the Grade 3, $200,000 Lecomte Stakes. Owned by Susan Moutlon, the 3-year-old son of Will Take Charge is the most experienced horse in the full field with seven starts
under his belt. He was a recent second to Gray Attempt in last month’s Sugar Bowl Stakes.

“He ran a big race that day,” Catalano said. “We probably could have let him run a little more since he broke so sharp and if we were a little closer we might have run (Gray Attempt) down. He ran well though.”

Manny Wah breezed five furlongs early Sunday morning in a time of 1:00.60, the third fastest of 77 recorded works at the distance.

“He worked extremely well,” Catalano said. “He tries every time you lead him over there for a race. We’re excited going two turns for him again. We’ll try to have him sit in the pocket with some speed. If we do that we’re in good shape.”

A $175,000 purchase from Warrendale Sales’ consignment operation at the 2017 Fasig Tipton July Sale, Manny Wah is the first offspring out of the Grade I-placed broodmare Battlefield Angel who is  a half-sister to 2017 Kentucky Derby runner-up
Lookin At Lee. Both are out of black type-winning broodmare Langara Lass.

Justify vs. Accelerate: Horse of the Year Race’s pros and cons