Mendelssohn leads the Kentucky Derby betting for trainer Aidan O’Brien after scorching to an 18¼-length win in the UAE Derby under Ryan Moore, breaking the track record in the process.

No European horse has ever won America’s greatest race but Mendelssohn’s devastating performance was enough to give hope that he could be the one to break that record.

BetVictor cut Mendelssohn to 8-1 co-favourite of four (from 20-1), while Coral also initially went 8-1 (from 20) before cutting him further to 6-1 clear favourite, citing “significant” support.

O’Brien has run five horses in the Kentucky Derby, his best result coming in 2011 when Master Of Hounds finished fifth.

Mendelssohn is already a winner in the United States having landed the Group 1 Breeders’ Cup Juvenile Turf at Del Mar in November. He previously chased home stablemate US Navy Flag in the Dewhurst, having finished last in the Champagne Stakes less than two months prior.

It was a third win in the UAE Derby for Aidan O’Brien, who was also quick to send his best wishes to the unwell Pat Smullen. He said: “We have to be delighted and he has done that very well having broken smartly which was important. 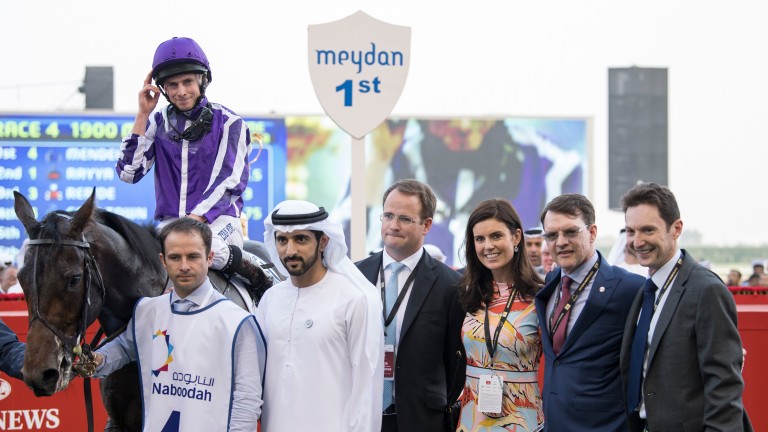 “Obviously the lads will want to discuss it but the Kentucky Derby has to be an option.”

Moore added: “He is a very fast horse so the plan was to be positive and utilise that early speed. He is all quality and, today, has answered questions regarding the surface and trip.

“He’s a high-quality horse and is getting better with every start. He has the pedigree and the looks to go with his form and his very exciting. I feel like he will continue to get better.

“The Kentucky Derby, with 20 runners, will obviously be a lot tougher but he is a very smart animal.”

Moore partnered Lines Of Battle to win this for O’Brien in 2013, a year after Colm O’Donoghue landed the spoils on Daddy Long Legs.

UAE Oaks winner Rayya was the distant second and her trainer, Doug Watson said: “She has been beaten by a proper horse and has run a great race.

“She goes to Bob Baffert now with the aim being the Kentucky Oaks and I will, obviously, follow her career with great interest.”

Moore was completing a double having, earlier, made virtually all in the opening Group 2 Godolphin Mile aboard Heavy Metal who was registering his seventh victory over the Meydan dirt mile but first for Sandeep Jadhav. 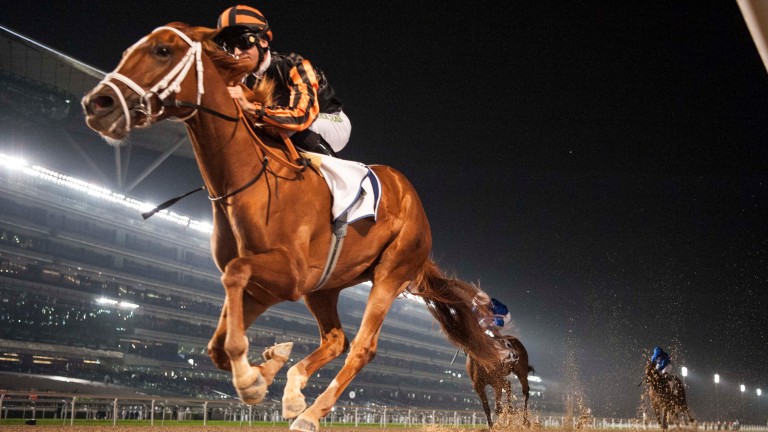 Rayya: will now go into training with Bob Baffert

The rookie handler, who also had Capezzano in the race, was saddling his first ever runners having taken over the preparation of the horses formerly trained by the recently suspended Salem Bin Ghadayer.

Moore explained: “He had to work hard early on to get to the lead but was always then in a great rhythm and I knew, turning in, I was not going to be beaten.”

There was confusion for punters, particularly backers of the unnamed favourite, after the UAE Derby, with winner Mendelssohn shown as 13-8 favourite with some major bookmakers and media outlets even though the ‘industry’ starting price issued by the official provider SIS was 7-4 second-favourite behind Charlie Appleby’s unplaced Gold Town at 13-8.

SIS has the contract to supply bookmakers with industry starting prices from Meydan and the company’s data operations department explained that the prices are compiled from the final show on display with four firms: Betfred, Coral, Ladbrokes and Paddy Power.

A department spokesman said that while two of the firms, Betfred and Ladbrokes, were showing 13-8 about Mendelssohn as their last show, Coral and Paddy Power had him at 7-4. The protocol the company uses to create the starting price is to take the two best prices from the four, which in this case were both recorded as 7-4.

The 6f Group 1 Golden Shaheen, the big dirt dash on the card, was dominated by the American raiders with ‘the stars and stripes’ landing the race for a 12th time and providing the 1-2-3.

Last year’s winner, Mind Your Biscuits, emulated compatriot Caller One who won the race in both 2001 and 2002.

However, it certainly did not appear likely at halfway when, under Joel Rosario, he was last of the eight runners, a position he occupied until early in the straight.

Up front, another American, XY Jet wrestled the lead from Jordan Sport and looked set to withstand the challenge of last year’s Breeders’ Cup Sprint winner, Roy H and go one better in a race in which he was second in 2016. 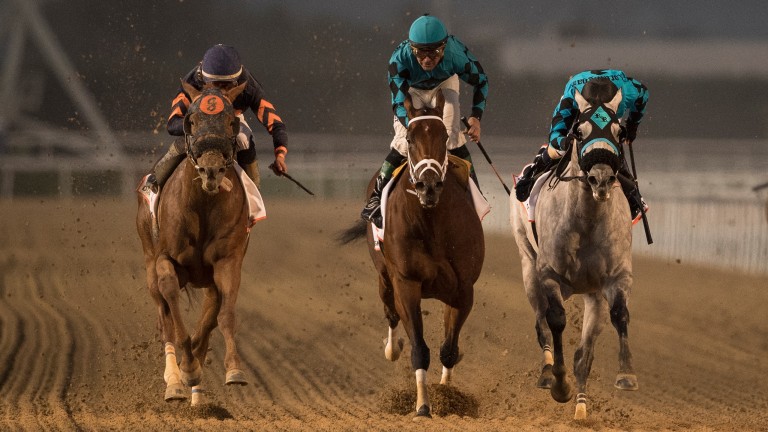 He did hold off Roy H but Mind Your Biscuits suddenly flew home, swallowing his two compatriots up in the final strides.

Rosario said: “I have always had a lot of confidence in this horse who has plenty of ability but today we struggled to keep up early on.

“I didn’t want to get after him so let him find his stride but I was a bit worried at halfway. I knew they had gone hard so was hoping they would come back but, credit to the horse, he has pulled that out of the hat.”

Weatherby A Man For All Seasons | TDN | Thoroughbred Daily...

Librisa Breeze on course for Diamond Jubilee for Dean Ivory

Betfair extend minimum bet to win guarantee to all British and...

Horse racing tips: Best bets for Monday, May 21 from Carlisle,...