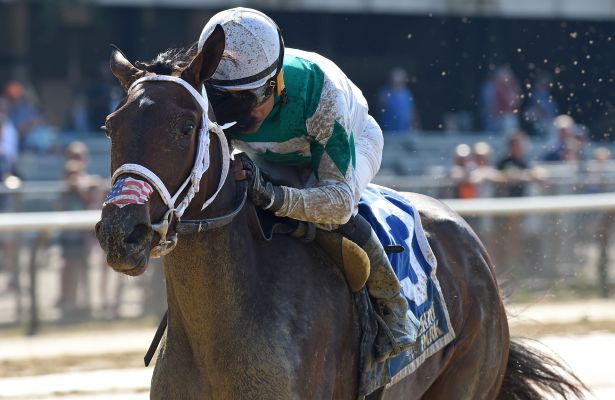 
The bay filly, who was making her debut for owners Pines Stables, John J. Irwin, Paul Zysset and Sam Arci and trainer Gary Contessa, broke well enough and found herself in third between horses in the first furlong, but then began to drop back and had only one horse beat going into the turn. The bay filly made up some ground around the bend, then came four-wide entering the stretch, ultimately hitting her best stride in the final furlong as she pulled away impressively to stop the timer in 1:13.41 for the six furlongs over a sloppy main track.

Bred in New York by Sandy Glenn Stables LLC, Maiden Beauty sold to her owners at the 2018 OBS Spring Sale of 2 year olds this April. The winner is out of the Eddington mare Alpha Charlie.


Revolutionary, out of Grade 1 winner Runup the Colors, put together two excellent campaigns at three and four. After winning both the Withers S. (G3) and Louisiana Derby (G2), he was a gallant third in the Kentucky Derby (G1) following a troubled trip. At four, he won the Pimlico Special (G3) and was  beaten less than a length in that year’s Oaklawn H. (G2).

Harry Fry set to run Kylemore Lough at Kempton in the...