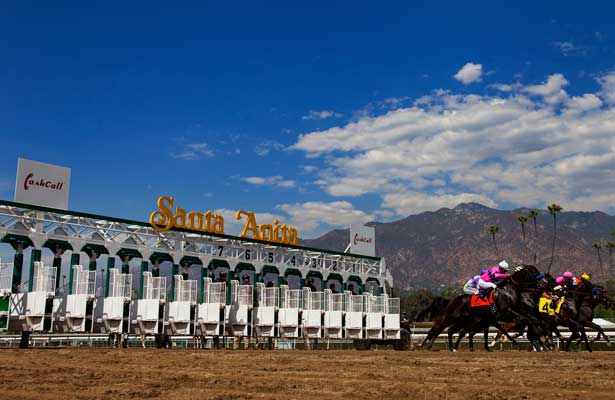 With a mandatory payout in place and a “live money” carryover of $1,143,194 setting Santa Anita’s pari-mutuel table, it is expected Sunday’s 20-cent Rainbow Pick Six Jackpot could exceed $7 million by fifth race post time, which has been set at 1:20 p.m. PT.

With a return to Standard Time on closing day, Sunday, fans are advised to make their selections early, as there is a special early first post time of 11 a.m. local for a 10-race program.

A total of 68 horses are eligible to run in Sunday’s Rainbow Six, resulting in average field size of 10.3 runners per race. Leg four in the closing day “Rainbow” is the Grade 2, $200,000 Twilight Derby, which has been carded as Race 8 and has attracted a field of 10 at a mile and one eighth on grass.

River Boyne, who is trained by Jeff Mullins and will be ridden by Flavien Prat, has been installed as the 5-2 morning line favorite.

Wildly popular at Gulfstream Park in Florida for several years, the Single Ticket Rainbow Pick Six Jackpot was instituted at Santa Anita on opening day of its 22-day Autumn Meet Sept. 28 and the results have been solid, with consistently big payoffs throughout the five-week run.