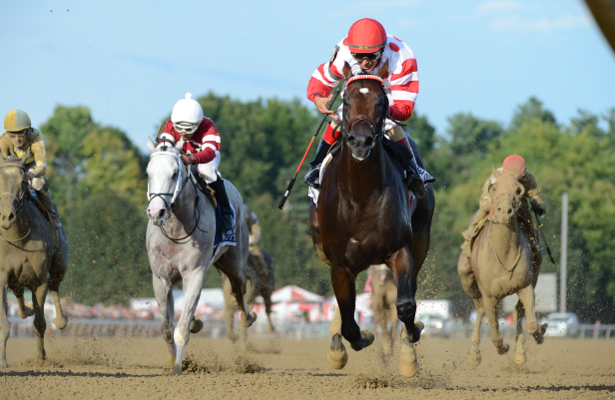 After fighting through early fractions with Nitrous, Mind Control skipped away from that rival and hit the wire in time as the even money favorite Mucho closed late.

The victory marked trainer Greg Sacco’s first top-level win, and he got it with Hall of Fame jockey John Velazquez in the irons. The final time for seven furlongs was 1:22.99 with Mind Control 3/4 of a length clear.

“I’m the son of a trainer,” Sacco said. “My dad never had the opportunity to train these types of horses. It’s very meaningful. It’s a great feeling. I have my whole family here and I can’t be any happier.”

The son of Stay Thirsty was a 10-1 shot in a Hopeful field of eight that contained everything from previous graded stakes winners (Sombeyay) to a maiden (Derby Date).

The opening fractions went in 22.96 and 45.68, modest but not blazing for a seven-panel race, as Mind Control held his ground inside of Nitrous.

Sacco credited Velazquez with deciding to duel with Nitrous. The original plan was to let him go to the lone lead.

“Once we reached the three-eights pole and I asked him, he was full of run,” Velazquez said. “I was real proud of the way he finished he came on and never relinquished.”

“Johnny’s the ultimate athlete and showed what we can do,” Sacco added.
Mucho made it a three-wide battle through the turn but didn’t gain ground on the winner until late, suggesting the runner-up could be one to watch going longer distances.

Sacco said the Breeders’ Cup Juvenile will be considered for Mind Control.

“I don’t think the distance will give him limitations,” the trainer said. “The way he’s trained and galloped out last race, he’s just a genuine horse. He has a ton of ability the main thing is that he’s so smart. He acts like an older horse and does everything right. For a young horse, it’s a big plus.”

Four stars set to shine at Lingfield on Good Friday |...

Royal Ascot 2018 preview: From Cracksman and Dettori to Coolmore and...