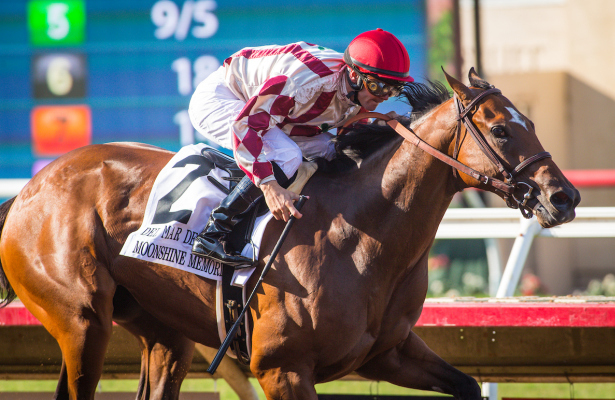 Trained by Simon Callaghan, Moonshine Memories won her first three races as a 2-year-old, including the Del Mar Debutante (G1) and Chandelier (G1).

The Lexus Raven Run represents her third trip east from her Southern California base. Moonshine Memories finished fourth in the Acorn (G1) at Belmont in June and in her most recent start was third in the Prioress (G2) at Saratoga on Sept. 2.

Mike Smith has the mount and will break from post position nine.

Novogratz Racing Stables’ Amy’s Challenge tuned up for a start in Saturday’s Lexus Raven Run by working a half-mile in :46.80 on Wednesday morning over a fast track for trainer Mac Robertson.

Working on her own after the renovation break, Amy’s Challenge galloped out 5 furlongs in :59.

Undefeated as a 2-year-old and graded stakes-placed this spring at Oaklawn Park, Amy’s Challenge comes into the Lexus Raven Run off a turf sprint victory at Canterbury Park.

“I was just trying to get her a win,” Robertson said of the grass start. “She had been running her guts out without winning one.”

Amy’s Challenge came to Keeneland last fall after beating the boys in her first two starts but did not race.

“She’s a sound filly and she has done well here,” Robertson said.

Wednesday’s work was the third for Amy’s Challenge at Keeneland following a bullet 5 furlongs in :59 on Oct. 9 and another five-eighths work in :58.60 on Oct. 3.

Horse Racing Betting Tips: Nicholls the Cyrname to concentrate on in...

Our racing team nominate their stars of the 2018 Flat season...

Breeders’ Cup berth on the line in Woodbine’s Summer Stakes