John Gosden was full of praise for Frankie Dettori after Wissahickon turned the 33-runner bet365 Cambridgeshire into a one-horse race but the real hero of the hour was the winner’s groom Asif Nazir, who had to limp on to the winner’s rostrum to collect his prize having been floored as the stroppy chestnut tried to avoid Dettori mounting before the race.

“He took off when Frankie came up to him and trampled on my foot,” said Nazir, who looks after the bulky son of Tapit at home.

“It was painful but I’m okay. He can do this at home and is a little bit naughty.”

Dettori, who by his own admission tries to avoid unruly characters nowadays, eventually mounted on the chute away from the paddock and from that moment his partner was on best behaviour.

After a 50-1 boilover in the same race last year, normal service was resumed in the Cambridgeshire, run at a frantic pace over the Rowley Mile and one furlong, with Wissahickon a popular winner at 11-1 by an easy three and three-quarter lengths from Mordin.

“Frankie said they went too hard,” said winning trainer John Gosden, snaring a fourth Cambridgeshire and the first with Dettori since Halling scored for the duo in 1994.

“Frankie let him coast for three furlongs and picked him up again. Age and wisdom – it was a clever ride. He’s not a Halling but he’s good and we’ll have to go Listed now.

“He’s a nice horse but a bit wild. He won well, though, and full marks to the jockey.”

Gosden then revealed he had picked up an arm injury in the pre-race melee. “He careered over our hero Asif and when I legged Frankie up he put me into the rail, so Frankie was very brave for a boy of 47. Apparently he behaved very well down at the start.” 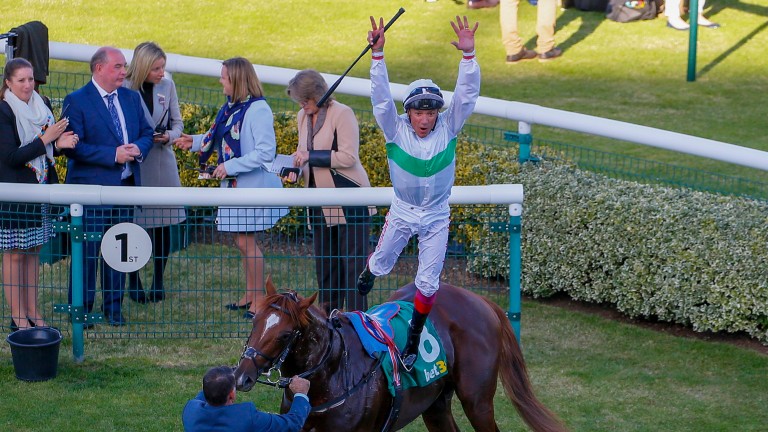 Dettori rubbished any comparison between the winner and subsequent five-time Group 1 winner Halling, although he believes a step out of handicap company is realistic.

“A Group race could be within his reach now,” said the rider. “He’s improving with every run but I thought they went too fast and it probably made it look better than it could have been. He was a bit silly beforehand and gets himself a bit nervy but he was fine once he was out on the track.”

Simon Crisford, who also took second with Jash in the Middle Park, admitted he would have preferred some juice in the ground for runner-up Mordin, although he was delighted with the effort.

Picking up their share of the £160,000 prize were Via Via and Sabador in third and fourth, with both runners heading next to the Balmoral Handicap on British Champions Day at Ascot.

Maddy Playle and the team review the weekend action and look...