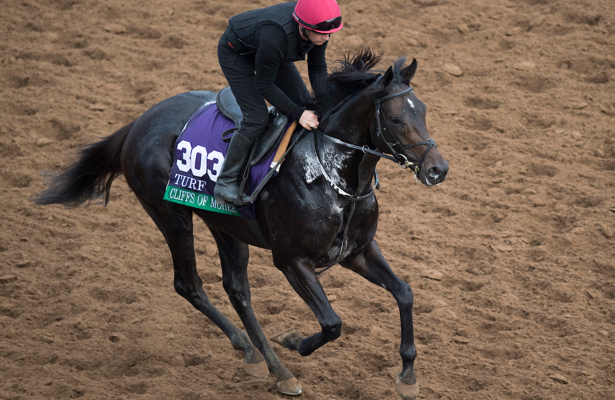 Cliffs of Moher, run as The Cliffsofmoher in Australia, suffered catastrophic injury when breaking down early in the 2018 Melbourne Cup, Racing.com reported after Tuesday’s race (off late Monday ET in the United States).

The 4-year-old bred in Ireland and trained there by Aidan O’Brien has run in top races worldwide, including the 2017 Breeders’ Cup Turf at Del Mar, where he finished eighth in the race won by Talismanic.

Racing.com’s Shane Anderson reported that the colt was euthanized after fracturing his right shoulder.

The incident happened as contenders crossed the wire the first time by in the two-mile race at Flemington. When runners came by a second time — Godolphin’s Cross Counter was the winner — a tarp could be seen where vets tended to The Cliffsofmoher.

Ryan Moore, who was just in the U.S. to ride at the Breeders’ Cup, had the riding assignment on the ill-fated horse.

“Unfortunately these things can (even) happen to a horse galloping around the field at home,” O’Brien told The West Australian.

After his win, jockey Kerrin McEvoy, who was aboard Cross Counter, said he and others were “very lucky” not to be caught up in an incident the first time by when The Cliffsofmoher broke down.

A race commentator on the track feed made it a point to note The Cliffsofmoher was “sweating up badly” before the race, though that’s common for the colt in his training and races.

The Chairman and Directors of the Victoria Racing Club (VRC) extend their sympathies to the Williams family and Coolmore connections of The CliffsofMoher, who was euthanised after he went amiss in the Melbourne Cup.

A sad postscript to the #MelbourneCup after leading contender The Cliffsofmoher went amiss.

Our thoughts go out to everyone invovled with the horse.

Get all the latest news from the race. pic.twitter.com/lHWhAjRVAu